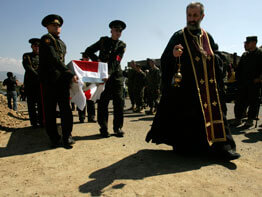 WARSAW, Poland – Catholic aid workers in Georgia said diplomatic tensions between Russia and Georgia will not help refugees stranded by recent fighting between the two countries.

“Over 128,000 have already been displaced inside Georgia by the conflict, and concern is mounting about what will happen to those who can’t go back, who’ll need housing, vocational training and a new start in life,” said Laura Sheahen, an information officer for the U.S. bishops’ Catholic Relief Services who visited Georgia in late August.

On Aug. 7, the Georgian army had launched an assault to regain control of South Ossetia, triggering a counteroffensive by Russian troops who advanced deeper into Georgia.

In an Aug. 28 telephone interview with Catholic News Service, Ms. Sheahen said CRS was cooperating with other humanitarian organizations in funding food, hygiene equipment and medicine for refugees from the fighting.

She said many people had returned to western Georgia but would face hardships obtaining fuel and repairing their homes during the coming winter.

Father Witold Szulczynski, head of Caritas Georgia, said humanitarian aid was reaching the people of Tbilisi and that life appeared to be “returning to near-normal” in the war-damaged city of Gori. Caritas Georgia is the local affiliate of the international umbrella group of aid agencies, Caritas Internationalis.

Father Szulczynski said a partial Russian blockade would worsen the plight of refugees. He said armed gangs were “robbing and plundering” villages between Gori and the South Ossetia border, where 60 percent of Georgian-occupied homes had already been burned.

“It isn’t the first time people here have been attacked and bombed, and many are saying they don’t want to go back,” the priest told CNS Aug. 29 in a telephone interview.

“I met a woman in one of the Tbilisi refugee shelters who was crying because she had no news of her husband, and others who were missing mothers, fathers, sisters and brothers. They say they just want to live as normal people in normal conditions,” he said.

Ms. Sheahen said she had heard “many sad stories” while touring the country, adding that most refugees appeared “too shocked” to express resentment.

She said she had met a bedridden 87-year-old woman who had been carried by her daughters, both over 60, from their home in Abkhazia’s Kodori Valley to escape the violence. The woman was languishing in a shelter without electricity or bathrooms in Kutaisi, Georgia’s second-largest city, Sheahen said.

She said a 50-year-old villager from South Ossetia had described having to run from his childhood home, leaving his cows and fruit trees.

Another man recounted fleeing Ts’khinvali to escape fighting in the 1990s and in August had fled from his new home near Gori with his wife and children to escape Russian bombing.

“My heart breaks for people like this, who thought they’d be safe and wouldn’t have to run anymore,” Ms. Sheahen said.