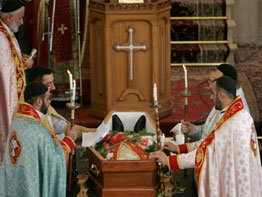 VATICAN CITY – In the wake of the murder of a Syrian Orthodox priest in Iraq, Pope Benedict XVI urged Iraqis to embrace peace in their efforts to build “a just and tolerant society.”

The pope sent his condolences in a telegram upon hearing of the “tragic death” of Syrian Orthodox Father Yousef Adel Abudi.

The telegram, written on behalf of the pope by the Vatican’s secretary of state, Cardinal Tarcisio Bertone, was sent to Syrian Orthodox Archbishop Severius Jamil Hawa of Baghdad, Iraq. The Vatican released a copy to reporters April 7.

The 40-year-old Iraqi priest was killed in Baghdad after gunmen fired on the car in which he was traveling.

Father Abudi was the head of a high school attended by Muslims and Christians. The Rome-based missionary news agency AsiaNews said the priest ignored threats and demands that he give up his post.

The pope expressed his deep sadness for the latest violence and sent the victim’s wife and family “his heartfelt condolences.”

“His Holiness prays that all people will follow the ways of peace in order to build a just and tolerant society in the beloved land of Iraq,” the telegram said.

The funeral was April 6 at the Syrian Orthodox Church of St. Peter and Paul in Baghdad, where the late priest served.