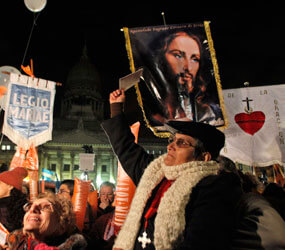 By a 33-27 vote with three abstentions, the Senate passed a bill that had already been approved by the lower house. Although the bill was supported by the government of President Cristina Fernandez, voting did not follow party lines.

The results were released in the early hours of July 15 after more than 14 hours of fierce debate in the Senate. Outside the national congress, thousands of people demonstrated – for and against the bill.

Catholics – from elderly nuns to schoolchildren – protested on the street in sub-zero temperatures and caused traffic chaos in downtown Buenos Aires. Police had to be called in at one point as scuffles broke out between gay rights activists and those opposed to gay marriage.

Neither the Archdiocese of Buenos Aires nor the Argentine bishops’ conference has released statements in response to the passage of the bill, which becomes law once it is published in the government’s official bulletin.

However, a spokesman for the Archdiocese of Buenos Aires confirmed to Catholic News Service that the church will not perform same-sex marriages. The bill calls for civil marriages, and the Catholic Church is not obliged to perform religious ceremonies for same-sex couples.

On July 11, Buenos Aires Cardinal Jorge Bergoglio encouraged clergy across the country to tell Catholics to protest against the legislation because, if enacted, it could “seriously injure the family.”

The new law would give homosexual couples the same legal rights as heterosexual couples, including the right to adopt children. The latter is one the most contentious issues in a country whose population is predominantly Catholic.

Cardinal Bergoglio said that adoption by same-sex couples would result in “depriving (children) of the human growth that God wanted them given by a father and a mother.”

The Buenos Aires archdiocesan spokesman said children adopted by same-sex couples could be baptized into the Catholic Church. However, the spokesman said, these and other issues will be discussed and clarified at the August meeting of Argentina’s bishops.

The Catholic Church teaches that marriage is the union of a man and a woman and supports traditional marriage as the building block of society and the best way to nurture and protect children. It also upholds the dignity of homosexuals and opposes unjust discrimination against them.

In the United States, same-sex marriages are legal in Connecticut, Iowa, Vermont, New Hampshire, Massachusetts and the District of Columbia.

Same-sex civil unions – which do not allow for as many rights as same-sex marriages – have been legalized in Uruguay and some states in Mexico and Brazil.

Colombia’s constitutional court has granted same-sex couples inheritance rights and allowed them to add their partners to health insurance plans.