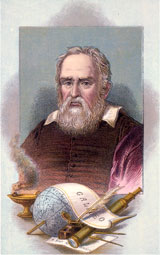 VATICAN CITY – Four centuries after he was called by church officials to retract teachings deemed suspect of heresy, the 17th-century Italian astronomer Galileo Galilei will be returning to Vatican City.

A statue of the great scientist will be erected in Vatican City to help commemorate next year’s celebration of the International Year of Astronomy and the 400th anniversary of Galileo’s first use of the telescope to observe the cosmos.

Paid for through private donations, the work of art was commissioned by the Pontifical Academy of Sciences, but the statue still needs a place to call home.

The science academy “is one of the most beautiful masterpieces of Italian Renaissance art and, therefore, there is a problem of precisely where the statue should go” so as not to disrupt the aesthetic beauty of the landscape, the academy’s president, Nicola Cabibbo, told Catholic News Service.

“The Vatican is very enthusiastic about the idea,” he said, but “the problem is where. … But something will be worked out,” hopefully by next year when the jubilee kicks off.

Cabibbo, a particle physicist at Rome’s Sapienza University, said honoring Galileo in such a way is important because the academy considers the scientist “to be one of the oldest members of our academy.”

The pontifical academy has its roots in the world’s oldest scientific academy – the National Academy of Lincei – of which Galileo was a member.

Cabibbo said a model of the statue shows Galileo standing and gesticulating as if he were giving a lesson.

Galileo, in fact, taught the church several important lessons. Pope John Paul II outlined most of them in a 1992 speech when he formally acknowledged that the church erred when it condemned the astronomer for maintaining that Earth revolved around the sun.

After accepting the findings of a commission he had appointed in 1981 to study the Galileo trial, the pope told members of the Pontifical Academy of Sciences that the Galileo case held important lessons concerning “the nature of science and the message of faith.”

One key point, he said, was that the whole affair underlined “the duty for theologians to keep themselves regularly informed of scientific advances” so they could see whether there was cause for “introducing changes in their teaching.”

Galileo’s condemnation in 1633 by the Holy Office, predecessor of the Vatican Congregation for the Doctrine of the Faith, is often used to symbolize the tensions between science and religion; critics often use the Galileo affair to suggest religion might somehow be an obstacle to the advancement of human knowledge.

This “myth,” as Pope John Paul had called it, is still alive and well, despite the late pope’s hopes of putting the Galileo case to rest for good.

Earlier this year, Pope Benedict XVI canceled a planned visit to Sapienza University after more than 60 professors wrote a letter protesting the visit, saying the pope was “hostile to science.”

One accusation – based on an erroneous page on the Italian Wikipedia Web site – held that the pope was “against Galileo.”

The page, which has since been corrected, said that in a 1990 speech the future pope endorsed a modern philosopher’s opinion that the church’s trial of Galileo was “reasonable and just” when in fact the pope had called the author’s opinion “drastic.”

During a talk to young people at the Vatican in 2006, Pope Benedict praised the scientist as “the great Galileo” who understood mathematics as the language of God the creator.

Born in Pisa in 1564, Galileo was one of the most important mathematicians, physicists, astronomers and inventors of his era. Through his telescopic observations he discovered sunspots, the moon’s pocked and mountainous surface and Jupiter’s satellites.

He also provided evidence for Copernicus’ view that Earth revolved around the sun. At the time, the generally held theological view was based on several Old Testament verses and attested the sun revolved around a stationary Earth. This view of the Earth-sun relationship was considered an essential part of the overall belief that humans, as redeemed by Christ, are the center of the universe.

Galileo argued his controversial heliocentric view did not oppose faith.

He believed the Bible was not meant to give scientific explanations of nature; in a letter he once paraphrased a famous remark by Italian Cardinal Caesar Baronius saying sacred Scripture does not reveal what is in the heavens, but rather how to get to heaven.

Jesuit Father Sabino Maffeo, the Vatican Observatory’s vice director for administration, told CNS that Galileo ran into trouble with the Holy Office because he did not have proof for his claims.

“Not having proof … (the Holy Office) was forced to hold on to the centuries-old concept” that saw Earth as the center of the cosmos, he said.

If he had had proof, which did not come for another 100 years with discoveries made by Isaac Newton, Galileo’s fate could have been much different, Father Maffeo said. He added that Italian Cardinal Robert Bellarmine, who was part of the 17th-century Vatican commission that admonished Galileo not to hold or defend the Copernican theory, had told Galileo “the day in which you bring a demonstration then we will have to look at how sacred Scripture gets interpreted differently, but as long as there is no proof, we will continue to interpret (Scripture) literally as we have all along.”

The Stensen Institute, a Jesuit-run cultural center in Florence, Italy, has organized a world congress for spring 2009 to re-examine the Galileo affair.

Members of the Vatican Observatory, the Pontifical Council for Culture and the sciences academy are some of the experts invited to the congress to show how “recent scientific and historical research” could help alleviate the “tension and conflict” still clouding the relationship between the church and science, said Jesuit Father Ennio Brovedani, head of the Stensen Institute.

The Jesuit is just one of a number of scholars who believes there is still more to be done to assure the public that the church has made peace with Galileo.

Cardinal Paul Poupard, who was the last to head Pope John Paul’s commission on Galileo, told CNS that the late pontiff once asked him, “Well, Eminence, has the case been closed?”

“I told him, ‘No, there will still be women and men who with (free will) will be able to think whatever they want,’“ the cardinal said.