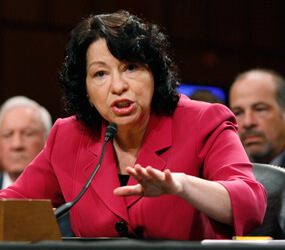 WASHINGTON – Judge Sonia Sotomayor appeared to be headed for the Supreme Court after at least half a dozen Republican senators said at the conclusion of her confirmation hearings July 16 that they would vote to affirm her appointment to the high court.

After opening day for the hearings July 13, the 55-year-old appeals court judge faced detailed and often repetitive questions from the Senate Judiciary Committee about court cases both well-known and arcane July 14-16.

Questions aimed at getting at how Sotomayor would rule on particular types of cases, including abortion, proved as unsuccessful in eliciting a specific answer as they have at previous Supreme Court nominees’ confirmation hearings.

In contrast to the two most recent appointees to the court, Sotomayor received no questions from senators about how her Catholic faith might influence her judicial decision-making.

Chief Justice John Roberts and Associate Justice Samuel Alito, who joined the court in late 2005 and early 2006, respectively, both were questioned about how being Catholic might influence them on the court. Alito’s answers were similar to this response by Roberts to one version of the question:

“There’s nothing in my personal views based on faith or other sources that would prevent me from applying the precedent of the court faithfully,” Roberts said.

Though Sotomayor would become the sixth Catholic on the nine-member court, the most in history at one time, the only references to her religion came up in passing in introductory statements by several senators. Sotomayor’s own opening statement July 13 noted only that she attended Cardinal Spellman High School in the Bronx borough of New York, without describing it as Catholic.

There were plenty of questions targeted at figuring out how Sotomayor would rule on specific issues such as abortion, which some suggest might be swayed by her personal feelings and which others say should be influenced by the teachings of the church.

On July 15, Sen. Tom Coburn, R-Okla., questioned her about the legality of a woman terminating a pregnancy at 38 weeks if it were discovered the unborn child had spina bifida, a congenital defect often resulting in paralysis.

Sotomayor said she could not answer because the hypothetical situation was too abstract.

“I would have to look at what the state of the state’s law was on that question,” she explained. Even if she had that kind of information, she said, she could not answer because such a case might come to the court.

Coburn asked Sotomayor whether advances in medical technology should have any effect on the legality of abortion as determined by Roe v. Wade, the 1973 ruling legalizing it nationwide. He cited as an example medical technology that allows premature babies born at 21 weeks to grow into healthy children.

“All I am asking is should viability be considered as we discuss these delicate issues?” he said.

Sotomayor said she could not answer Coburn’s question because the issue in the Roe decision was the constitutional right of a private citizen, not the viability of a fetus.

“I can’t because that is not a question the court reaches out to answer,” she said.

Committee chairman Sen. Patrick Leahy, D-Vt., set a vote on Sotomayor’s confirmation for July 21. Though there was some indication Judiciary Committee Republicans might exercise their right to postpone the vote for up to a week, it was expected the confirmation would move on to the full Senate before the congressional summer break, scheduled to begin Aug. 10.

The nomination is expected to win the support of perhaps all of the Senate’s 60 Democrats and 10 or more Republicans. Six GOP senators had announced by July 17 they would vote to confirm her.

Sotomayor was nominated by President Barack Obama May 26 to replace Justice David Souter, whose retirement was effective at the end of the 2008 term June 29. The court’s 2009 term opens in October but the justices will rehear a case on the Campaign Finance Reform Act of 2002 several weeks early, on Sept. 9.

Amid questions about Sotomayor’s rulings as a member of the 2nd U.S. Circuit Court of Appeals, she was asked to discuss Supreme Court opinions on the detention of Japanese-Americans during World War II, on a recent ruling overturning a District of Columbia ban on handguns and on references in her public speeches about personal experiences influencing a judge’s rulings.

In questioning her July 14, Sen. Herb Kohl, D-Wis., asked Sotomayor whether she thought that Roe was “settled law.” She answered by saying only that the 1992 case Planned Parenthood v. Casey reaffirmed the central holdings of Roe, which continues to be the precedent.

A few glimmers of personal information about Sotomayor came out as she answered questions, such as when she was asked whether her views on civil rights had changed after the 9/11 terrorist attacks and how the events personally affected her. After the attack on the World Trade Center, she said her neighborhood in New York’s Greenwich Village was cut off for car traffic for some time, as emergency services used the streets for staging purposes.

But that did not change her perspective on the Constitution, she said, describing it as a timeless document that can address changing circumstances.

She also talked about how, although she is a native of New York who continues to live in the city, she travels around the country and likes to stay in people’s homes so she can get a better idea of how others live.

“I try very, very hard to ensure that in my life I introduce as much experience as I can with other people’s lives,” she said.

Later in the week, when asked why she wanted the job, Sotomayor told about her mother’s reaction years earlier to the news she had been nominated for a federal judgeship.

She explained that her mother was concerned about the pay cut her daughter would have to take when she left the corporate world and that she no longer would be traveling as much. But as Sotomayor explained it, her stepfather, Omar Lopez, reminded his wife, “You know your daughter and her stuff with public service.”

“That really has always been the answer,” the judge said about how she has shaped her career.

Anti-abortion protesters interrupted the proceedings several times during the first two days, shouting slogans about abortion from their seats in the public sections of the Senate hearing room before they were removed by security guards. Among the protesters who were removed and arrested for unlawful conduct and disruption of Congress was Norma McCorvey, who was known as plaintiff Roe in Roe v. Wade. After a change of heart about the legality of abortion, McCorvey has become a regular participant in pro-life protests in Washington and elsewhere.