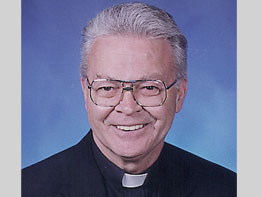 Monsignor George Moeller knows at some point during Christmas Mass at St. Margaret parish in Bel Air, he will think about it being his final one as an active priest.

But, he’ll do his best not to get emotionally caught up in the moment. The Word of God- just as it has been for last 46 years- will be paramount.

“I’ve just got to concentrate on the beautiful message,” he said.

Monsignor Moeller will retire Dec. 31 after serving the last six years as “Senior Priest” at the Bel Air parish.

“I just want to thank them,” he said. “This great parish has been a real inspiration to me. It’s full of warm, faith-filled people.”

Monsignor Moeller said he will travel more and connect with friends he has missed in recent years. The desire to travel was stoked earlier this year when he went on a pilgrimage to the Marian sanctuaries of Lourdes and other shrines in France with 37 St. Margaret parishioners.

The trip took on a deeper meaning as he visited the grave of his brother, who died in battle during World War II in Normandy. It was the first time he had visited the grave. Before he had private time to reflect, parishioners prayed with him.

“It was a very nice moment,” he said.