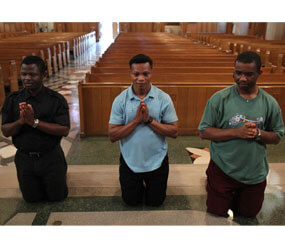 WASHINGTON – It might seem like an example of reverse mission: young African men leaving their homeland to pursue ordination as Catholic priests in a religious order that has no missionary presence in Africa, but a long-standing ministry to African-Americans.

For six Nigerians who will be serving in the United States as Josephite priests, it has been a 10-year journey, starting with four years spent in formation and undergraduate studies in a program the order has established in their home country and six years in the United States for the novitiate and graduate theological studies.

That journey concluded with their ordination in Washington May 29 by Bishop John A. Ricard of Pensacola-Tallahassee, Fla., who himself was ordained as Josephite priest.

The Josephites have been willing to educate men of any race who wish to minister to American blacks. But as the numbers of Americans both white and black who sought to enter the seminary dwindled, an opportunity arose to train Africans.

The first group 10 years ago numbered nine. Of those, six were ordained by Bishop Ricard. Of the Josephites’ 22 men currently in formation, all but two are from Africa, and of those, all but one are from Nigeria.

“There are other Nigerians in the pipeline,” said Josephite Father Brian Fox, rector of the Josephite seminary in Washington. “That pretty much is the pipeline.”

How did this all come to pass? Father Fox said the Josephites received a letter from the Missionary Society of St. Paul, which he characterized as a Nigerian equivalent to Maryknoll in the United States. “It was pretty much by accident, or an act of God,” he added.

“The letter was looking for financial assistance, then our superior said, ‘Maybe we can do something more than that.’ Some people would say there’s the hand of God in it all,” Father Fox told Catholic News Service in a May 27 telephone interview.

At first, a couple of Missionary Society of St. Paul priests came to the United States to work with U.S. Josephites. “They asked, ‘Why don’t you start a formation program in Nigeria?’” Father Fox said. It is the formation program that has been the wellspring of priestly vocations for the order, whose ministry is largely concentrated in a crescent stretching from Baltimore to Texas.

The new group of Nigerian Josephites spoke about their journey with CNS just before a rehearsal for their ordination ceremony.

The Josephite priest who talked in Nigeria about serving the African-American Catholic community “made it so appealing we had to come here for a mission,” said now-Father Kenneth Keke, 37. After the mission experience, he was sold.

It did not come without a struggle. Father Keke had to adapt to American food. Eventually, he made the adjustment – perhaps a little too well.

When Father Keke’s father arrived from Nigeria with some home cooking from the then-seminarian’s mother, Father Keke ignored it. “My father was so surprised. ‘Where do you get your food?’ ‘The seminary, papa.’ ‘You used to complain about the food.’ ‘But the food is now a part of me.’”

In his region of Nigeria, if someone passes another on the street and says, “Good day,” both parties can expect an extended and animated conversation. That’s not necessarily so in the U.S.A., Father Keke said. “I told my dad, when you greet people, they may not even see you. So do not get upset.”

Father Joseph Benjamin said that for him, the reverse was true. He had to be instructed by his seminary rector to “look people straight in the eye” or else others would think he was insulting them.

Asked what he would miss most about leaving the seminary experience over the past 10 years, Father Benjamin didn’t get a chance to answer before Josephite Father Godwin Akpan chimed in, joking, “I can’t give him a haircut again!” Father Akpan added he had given Father Benjamin a trim the week before their ordination.

But Father Benjamin said, “I’m sad to see the rest of them leaving” as they will soon be appointed to pastoral assignments likely hours away from each other.

One of the three Nigerians who left before ordination had been Father Benjamin’s best friend in Africa. “When my best friend left, that was the most difficult part for me,” he said.

But Father Keke noted that, even though he got a college degree in engineering, he still maintained his desire to be a priest. He said he followed his parents’ wishes and got the degree, but “when I graduated, the zeal was still there.”

Josephite Father Donald Fest, the order’s spokesman, told CNS in a telephone interview from Baltimore that the order’s program in Africa has “opened up our understanding and view of the broader church and the richness of the young church in Africa, especially Nigeria.”

“These young men coming in have a tremendous desire to be priests and are willing to make huge sacrifices to come to the United States to spend more time training for the priesthood than they would if they stayed in Nigeria,” he said. “And their whole future will be in the United States, ministering to the African-American community, which we have done since 1871, which is when we first started.

“It will allow us to continue the mission which we have undertaken all these years,” he said.