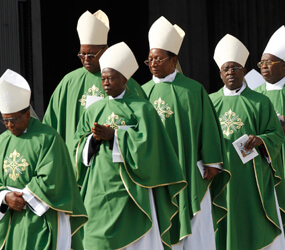 VATICAN CITY – After three weeks of discussion and strategizing, the Synod of Bishops for Africa ended with calls for spiritual conversion and social reforms on the African continent.

The more than 200 participating bishops published a message to the world Oct. 23, appealing for a fairer global order based on Gospel values and telling corrupt Catholic politicians in Africa to “repent or resign” in the name of the common good.

At a closing Mass in St. Peter’s Basilica Oct. 25, Pope Benedict XVI said if the church wants to change hearts and minds in Africa it must itself be a model of unity with “no divisions based on ethnic, language or cultural groups.”

The pope, who presided over most of the synod sessions, lunched with participants Oct. 24 and thanked them for “a good job.” He also received 57 final propositions from the synod, to be used as the basis for a papal document on pastoral directions in Africa.

The propositions called for a new spirituality to counter bad government, ethnic tensions, disease, exploitation by multinational companies and the cultural agenda of foreign aid organizations.

The pope encouraged the bishops to return to their African dioceses and broadcast their 11-page message, which denounced moral and social ills while reminding Africans of their traditional values, particularly regarding the family.

The message said poverty, misery, war and chaos are most often caused by “a tragic complicity and criminal conspiracy of local leaders and foreign interests.”

Africa needs “saintly politicians who will clean the continent of corruption, work for the good of the people and know how to galvanize other men and women of good will from outside the church to join hands against the common evils that beset our nations,” the message said.

The bishops called on international corporations operating in Africa to stop “their criminal devastation of the environment in their greedy exploitation of natural resources.” They lamented that no international body or world leader has come forth to stop “these crimes against humanity” that “foment wars in order to make fast gains from chaos at the cost of human lives and blood.”

The synod’s message noted the church’s valuable work in fighting HIV and AIDS and caring for those affected, and expressed agreement with Pope Benedict that condoms would not beat the pandemic. It asked people to recognize the success obtained by prevention programs advocating abstinence and fidelity within marriage.

The synod’s propositions also spoke about AIDS, calling for efforts against anything “that helps the spread of the disease, such as poverty, the breakdown of family life, marital unfaithfulness, promiscuity and a lifestyle that is devoid of human values and Gospel virtues.”

One of the strongest synod propositions condemned a section of the 2003 Maputo Protocol, adopted by the African Union in Maputo, Mozambique, on women’s rights in Africa for encouraging the continent’s governments to provide abortion services in cases of rape, incest or danger to a woman’s physical or mental health.

While thanking international aid agencies for their assistance, the bishops also criticized aid programs that come with strings attached that violate the recipients’ moral and cultural values.

The propositions said the family in Africa is threatened today by the practice of abortion, the denigration of childbearing, “the distortion of the notion of marriage and the family itself,” and divorce. The bishops called for better education of Catholics in the meaning of Christian marriage, improved marriage preparation programs and better support for families.

The propositions condemned all acts of violence against women, including “the battering of wives, the disinheritance of daughters, the oppression of widows in the name of tradition, forced marriages, female genital mutilation, trafficking in women and several other abuses such as sex slavery and sex tourism.”

Synod members promised to promote the education of girls and women, open shelters for those who are abused and bring women into church decision-making structures.

The closing Mass was concelebrated by more than 200 African bishops, and the liturgy combined Roman and African elements. A Nigerian choir, backed by a restrained drum and percussion section, sang a processional hymn in the Igbo language as the pope, dressed in gold vestments, entered the basilica.

In his homily, Pope Benedict said the church is called upon to deliver, in word and deed, Christianity’s perennial message of hope, which “the Lord of history never tires of renewing for the oppressed and overwhelmed humanity of every era and every land.”

“Get up, church in Africa, family of God,” he said. “Set out on the path of a new evangelization with the courage that comes from the Holy Spirit.”

God’s plan does not change, he said, and it is always aimed at the kingdom of liberty and peace for all. This implies his preference for those deprived of peace and freedom, and those violated in their dignity, he said.

“We think in particular of our brothers and sisters who in Africa suffer poverty, diseases, injustice, wars and violence, and forced migration,” he said.

The pope said the church must operate by combining evangelization and the promotion of social justice. Its method of “living the Gospel in the first person” seems to be the only one capable of helping Africa emerge from “the slavery of hunger and sickness,” he said.

He said globalization, in particular, needs to be steered by the church toward a more inclusive economic model that benefits all people and not only the wealthy. The church must work to “ensure that no African should be deprived of his or her daily bread,” he said.

The liturgy ended with an “Ave Maria” sung in Igbo by the Nigerian choir, and a liturgical chant in Ge’ez, a liturgical language of Ethiopia, invoking the “path of truth.”