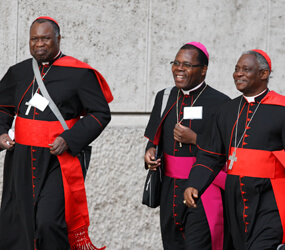 And, the cardinal said, no one should have been surprised that the United States, a promoter of democracy and human rights around the globe, elected a black president.

During a Vatican press conference Oct. 5, Cardinal Turkson was asked about the possibility of the church having an African pope someday and about his reaction to the election of President Barack Obama.

Cardinal Turkson said that, in assigning each cardinal a titular church in Rome, the pope – who is the city’s bishop – makes every cardinal a member of the clergy of Rome.

Because any priest could become a bishop, any bishop a cardinal and any cardinal a pope, the possibility of becoming pope is “part of – I don’t want to say baggage – is part of this package,” Cardinal Turkson said.

The cardinal, who gave the press conference as recording secretary of the Oct. 4-25 Synod of Bishops for Africa, said the Catholic notion of justice about which he spoke to the synod also comes into play when thinking about who should or could lead others.

“God’s justice toward us” does not demand payment for wrongdoing, he said, “because God overlooks our transgressions and whatever and admits us into communion.”

When Christians begin to think like God does, the cardinal said, they begin to forgive one another and recognize each other as full brothers and sisters no matter what their nationality or ethnicity.

“That is the challenge of the Gospel: to be able to transcend some of the challenges and impositions of culture, history, ethnicity and all of that. And part of that is, you know, seeing a black person in a position of leadership,” he said.

“If by divine providence – because the church belongs to God – God would wish to see a black man as pope, then thanks be to God,” the cardinal said.

While the election of Obama was a surprise on some levels, Cardinal Turkson said it should not have been surprising given “what the United States itself stands for” and the values it has tried to spread throughout the world. “It was not surprising that a black was elected.”

“Given the fact that one of the tenets of the country is that … everybody in America is subject to all the rights and has access to almost all the same privileges and positions in the land,” people should not have been surprised, even if there have been times when the United States did not fully respect its own proclamations of equal rights, he said.