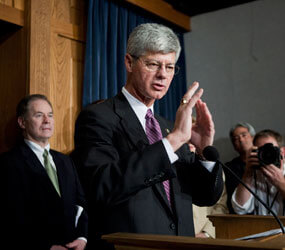 WASHINGTON – As the 111th Congress drew to a close with news reporting that focused on the bitter battles over tax cuts, it was a good time to look back on legislative successes that might have been somewhat lost in the shuffle.

The Catholic Church’s anti-poverty agenda and some of its international policy goals fared pretty well, rounding out the year with the signing Dec. 13 of the Healthy, Hunger-Free Kids Act, and an extension of unemployment benefits in a bill that also included some tax cuts for the middle class. Some progress also was noted on international issues, including assistance to Haiti, attention to Sudan’s long-running internal strife and possible ratification of a nuclear arms control treaty.

The Hunger-Free Kids law provides for the first increase in reimbursement to schools for meals in more than 30 years. The 6-cent per meal increase is intended to go to improve the quality of lunches and breakfast.

The bill also authorizes the U.S. Department of Agriculture to set nutrition standards for food sold in schools, encourages links between schools and local farms and will increase the number of students eligible to participate in school meal programs.

Funding for the program came at the cost of ending a temporary increase in the food stamp program, now known as SNAP, for Supplemental Nutrition Assistance Program, starting in the fall of 2013. But President Barack Obama said at the signing ceremony that he’s committed to restoring those funds before the cut would take effect.

The passage in March of the Patient Protection and Affordable Care Act, the massive health care reform legislation, drew mixed reviews within Catholic advocacy circles. Leaders of the U.S. Conference of Catholic Bishops clashed with the head of the Catholic Health Association and the superiors of many U.S. orders of women religious over whether the law and Obama’s executive order would permit the federal funding of abortion, force some people to pay for the abortions of others through their health insurance or violate the conscience rights of Catholic health providers and institutions.

On other aspects of health care reform, however, USCCB officials worked for provisions that would provide coverage to the millions of Americans who lack insurance. Many components of the new law had long been on the church’s wish list, such as universal access and cost controls.

Kathy Saile, director of domestic social development in the USCCB Department of Justice, Peace and Human Development, cited some other legislative successes on the USCCB agenda:

– Economic stimulus programs that left intact a “decently strong” safety net for the poor. That included an expansion of the Earned Income Tax Credit and the refundable child tax credit. During 2009, the first session of the 111th Congress passed legislation including an expansion of the State Children’s Health Insurance Program, known as SCHIP, to include immigrants and pregnant women, another long-sought piece of legislation.