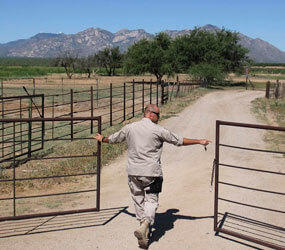 WASHINGTON – President Barack Obama and his administration want to see comprehensive reform of the nation’s immigration system “happen sooner than later,” according to a Catholic immigration advocate.

“I would be surprised if this wasn’t taken care of by the end of 2010,” said Mark Franken, executive director of the Catholic Legal Immigration Network Inc., known as CLINIC.

Franken, who made the comments in an interview with Catholic News Service, was part of a group of immigrant advocates, faith leaders, and labor, business and law enforcement officials who met in a closed-door meeting on immigration in Washington Aug. 20.

The meeting was the first in a series of conversations aimed at getting input from those who have a stake in the issue, according to Franken.

Representatives from the White House and the Department of Homeland Security participated in the discussion hosted by Secretary Janet Napolitano. Obama arrived at the end of the meeting to reiterate many of Napolitano’s points, including the need for increased efforts to push immigration reform.

Franken told CNS the meeting demonstrated the president’s commitment to the issue as well the administration’s need to hear from constituents and people who are educated about reform. Franken said he expected a certain degree of what he called “demagoguery,” referring to impassioned people rattling off incorrect information, so he said it was paramount that well-informed stakeholders voice their views in Washington.

Reform is in a brainstorming stage, Franken said, and the administration asked meeting participants questions about effective enforcement strategies and how to encourage immigrants currently living in the United States illegally to step forward and register for legal status.

The group did not generate unanimous answers, but Franken said he was surprised how often people did agree. Everyone recognized the need for reform, he said, but in addition they all supported a generous legalization program and fair, enforceable immigration laws.

Many of those at the gathering urged Napolitano to take more ownership of the immigration debate, according to Shaina Aber, associate advocacy director for the U.S. branch of the Jesuit Refugee Service.

Aber told CNS she thinks Napolitano understood that message and would communicate more with immigrant advocates in the future.

In a statement issued after the meeting ended, Napolitano said the gathering “was an important opportunity to hear from stakeholders and build on the significant time I’ve spent on the Hill meeting with members of Congress on this critical subject.”

Napolitano did not explicitly promise to help generate a bill that would come before Congress this fall, Franken said, but he expected a measure would likely be introduced before the end of the year.

He noted that Cardinal Francis E. George of Chicago, president of the U.S. Conference of Catholic Bishops, has urged the Obama administration to finalize reform and push for passage of a measure that could be signed into law before the beginning of 2010, but Franken said he does not think that is a realistic target.

In June Cardinal George wrote on behalf of the bishops to urge Obama and Congress to enact comprehensive reform before the end of 2009.

Franken and Aber both blamed the current health care reform debate for some of the delay on immigration reform.

In a teleconference call Aug. 21 with five speakers who attended the meeting with Napolitano, Arturo Rodriguez, president of the United Farm Workers, said he doesn’t want immigration efforts to take the stage while officials continue to debate health care because he thinks that will take energy and focus away from immigration reform.

The speakers said they didn’t expect the debate on immigration reform to reach the intensity the health reform debate has, and suggested it may be less “chaotic” and “confusing” than health care discussions because Americans are already familiar with the issue.

Though a comprehensive immigration reform bill has yet to be introduced, individual bills already have been introduced to address other immigration issues in the meantime.

Known as the Agricultural Jobs, Opportunity, Benefits and Security Act, or AgJOBS, and the Development, Relief and Education for Alien Minors Act, or the DREAM Act, both bills may advance through Congress before a comprehensive bill does.

The bills deal with agricultural workers and students without legal status who came to the country with their parents.

Aber said she is particularly interested in seeing the DREAM Act passed, because it would protect children “who shouldn’t be punished for the decisions of their parents.”