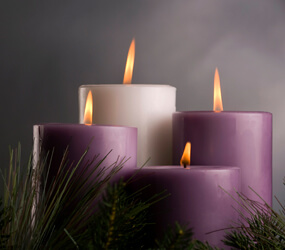 Catholics throughout the Archdiocese of Baltimore will mark the beginning of Advent Nov. 29 when the four-week period of preparation for the coming of Christ begins and the Catholic Church ushers in a new liturgical year.

“Advent has a double meaning,” explained Father Jesse Bolger, associate pastor of St. Margaret in Bel Air. “It’s a time of anticipation for the Incarnation – the Word made flesh on Christmas Day, but we also celebrate and await Christ’s Second Coming.”

The word for advent derives from the Latin word “adventus,” which means “coming.” It is celebrated as the beginning of the church year, Father Bolger said, because it is closely connected with the Incarnation.

Through the disobedience of Adam and Eve in the Garden of Eden, Father Bolger said, humanity lost a special relationship with God before it was restored through the birth, life, death and resurrection of Jesus Christ.

“That is why we begin the liturgical year with the birth of Christ,” Father Bolger explained, “because, in a sense, history begins again with Christ.”

The lighting of the advent wreath, a custom that was started by a 19th-century Lutheran pastor, is a traditional way Christians mark the four Sundays of Advent. During Mass or at home, believers light a candle during each Sunday of the season.

“The light represents the light of Christ,” Father Bolger said.

Three royal purple candles represent faith, hope and charity while a rose-colored candle is a symbol of joy and is lit on the third Sunday of the season – “ Gaudete Sunday” or “ Rejoice Sunday.” Gaudete Sunday takes its name from the opening antiphon for that day’s Mass, “Gaudete in Domino sempe,” “Rejoice in the Lord always.”

Advent’s liturgical color is royal violet, which represents the king to come. Priests wear rose-colored vestments on Gaudete Sunday as a symbol of rejoicing that the mid-point of the season has arrived.

Many Catholics also set up Jesse trees during Advent, upon which they hang ornaments representing great moments in the Old Testament like the building of Noah’s Ark and the giving of the Ten Commandments. The tradition reminds believers that the prophet Isaiah foretold of a shoot sprouting from the stump of Jesse, father of King David – a reference, Father Bolger said, of Christ coming from the line of David.

“It’s a reminder that the Bible isn’t a disparate collection of writings,” said Father Bolger, who recently gave a workshop on Advent at St. Margaret. “It’s cohesive and it’s God’s plan for humanity. The Old Testament symbols connect us to Jesus.”

Many Catholics also construct prayer chains during Advent. Made of brightly colored paper links, the prayer chains can be used to pray for others or practice good deeds. Others erect giving trees loaded with tags that may be taken to purchase gifts for those in need.

Another tradition is the building of Christmas scenes on a piece of plywood – a Moravian custom that is practiced in Frederick County and elsewhere.

“The plywood Christmas scenes are a very creative way to bring alive in miniature what happened 2,000 years ago,” said Father Bolger, who grew up in the Libertytown parish of St. Peter the Apostle. “I’ve seen them decorated with little figures, sand and moss. It’s a distinctly American tradition.”

While Advent is primarily a time of joyful anticipation that is reflected in Advent hymns like “O Come, O Come Emmanuel,” Father Bolger noted that Advent also has a penitential quality. Catholics are encouraged to receive the Sacrament of Reconciliation, he said, and parishes throughout the archdiocese will hold penance services in the coming weeks.

“It’s a time of spiritual housecleaning as we prepare to make our hearts ready to receive our Lord,” he said.