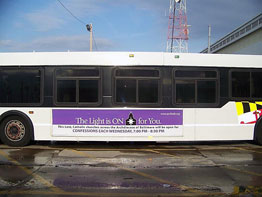 If you haven’t been to confession in a while, the Archdiocese of Baltimore has a message for you.

It will soon be all over buses and billboards, in print and TV and radio ads: “The Light is On for You.”

That’s a reference to the light above confessionals and the lights that will be on in parish churches that will stay open Wednesday nights during Lent so priests can hear confessions.

Archbishop Edwin F. O’Brien says too many Catholics have gotten away from regular Confession, and he’s using the Lenten media campaign season to try to get them to return.

“We have to make use of the media for important things in our lives if we want to get the message across,” Archbishop O’Brien said, “and this sacrament of reconciliation is an essential of our faith that is too often overlooked by people or not utilized as often as it should be.”

The campaign is patterned after a similar effort launched two years ago by the Archdiocese of Washington.

Not so long ago, Archbishop O’Brien noted, Catholics went to confession regularly.

“These traditions have fallen by the wayside,” he said. “We’ve just not given the stress and the attention to the beauty of the sacrament, as in the past, as we should. But this [campaign] has been a big step in that direction.”

Sean Caine, director of communications for the archdiocese, said the catchy ads should reach a wide range of Catholics, many of whom might find it easier to make confession Wednesday night than on a Saturday. (All churches will be open for confession 7-8:30 p.m. Wednesdays in Lent except Ash Wednesday and the Wednesday of Holy Week.)

“The ads will appeal to everyone from the person commuting home who catches a glimpse of a billboard or the side of a bus or hears it on the radio or read about it in the paper earlier in the day and can stop on the way home,” Mr. Caine said.

Stay-at-home parents or those busily running kids to Saturday sports also could find time after dinner on a weeknight to go to confession in their parish church, Mr. Caine said, and ideally continue going to confession after the campaign ends.

The campaign is particularly fitting for Lent, Mr. Caine said.

“So much of the emphasis of our faith in this period leading up to Easter is about a period of introspection and opportunity to draw closer to Christ,” he said. “One way to do that is through the very intimate and personal experience that comes through participation in the sacraments.”

(For more on The Light is On for You and the Sacrament of Reconciliation, visit www.archbalt.org/light.)