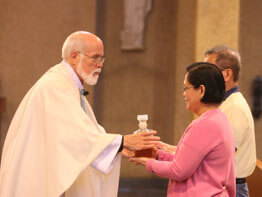 WASHINGTON (CNS) — It doesn’t take long for newcomers at St. Matthew Church in Baltimore to be welcomed by parishioners.

At their very first Mass, first-time visitors are invited to stand up and introduce themselves. After Mass it’s not unusual for parishioners to introduce themselves and personally welcome newcomers, chatting a bit about parish life. It’s a tradition 13 years in the making.

“We do a lot of welcoming,” said pastor Father Joe Muth. He said the act of welcoming is important in the parish, which is just about evenly split between black and white members.

It was Father Muth who brought back the idea from Kenya in 1995. During his trip to East Africa he saw how welcoming the Kenyan people were wherever he visited. His needs and comfort were the primary concern of his hosts.

“That was such a powerful experience to me,” he said in an interview with Catholic News Service. “I came back here and I told parishioners we need to find a way to make people feel welcome.”

Being a welcoming community took on greater importance following a period in the 1980s when the St. Matthew neighborhood experienced a shift in demographics. The schools at St. Matthew and a neighboring suburban parish merged in 1988, causing many white families to pull their children out of the new Cardinal Shehan School. Newcomers, primarily blacks, filtered into the parish as the new school’s staff sought out new students.

Today, in a parish as diverse as St. Matthew, welcoming has become vital in bridging the racial gulf, allowing the parish to build a community of understanding, caring and faithful people.

Perhaps St. Matthew is an anomaly. It’s no secret that Americans — in society as well as in the pew — remain separated by race, culture and economics.

The separation was illustrated May 25 when Father Michael Pfleger, a Chicago archdiocesan priest, mocked Sen. Hillary Clinton of New York as the Democratic Party primary process wound down. Speaking at Trinity United Church of Christ in Chicago, he said Clinton saw Sen. Barack Obama of Illinois, the party’s eventual presumptive nominee, as “a black man stealing my show” when he entered the race for the Democratic nomination.

“She wasn’t the only one crying,” added the priest, who is white. “There was a whole lot of white people crying.”

At the time, Obama belonged to Trinity, but has since resigned his membership.

Father Pfleger said June 1, a week after his speech, that his comments concerned racism not politics. Nevertheless, Cardinal Francis E. George suspended the priest as pastor of St. Sabina Church, an African-American parish in Chicago, for two weeks, saying he found the comments politically partisan.

Although Father Pfleger’s comments resulted in a suspension, they do reflect the realities of race in a society that remains divided, said Deacon Arthur Miller of the Office of Black Catholic Ministries in the Archdiocese of Hartford, Conn.

“Black folks heard what he was saying,” Deacon Miller told CNS. “White folks heard the way he said it.”

As important as it is for parishes to continue to reach out to newcomers — to a certain extent, the stranger as identified by Christ — people involved in ministering in minority communities across the country say it’s time to go an additional step to bridge the race chasm. They suggest it is time for white parishes seeking to build a unified faith community to actively invite people of other races to join them.

A bold step for sure, but a necessary step for a church that considers itself universal, acknowledged Ralph McCloud, executive director of the U.S. Conference of Catholic Bishops’ Catholic Campaign for Human Development.

“(People have) to look around their faith community and see who’s missing, see who’s not there, and acknowledging if there are people who aren’t there, then they’re not complete,” McCloud said.

The U.S. bishops’ 1979 pastoral letter on racism, “Brothers and Sisters to Us,” sets out the framework to address the issue in the Catholic Church. In it, the bishops call racism “an evil which endures in our society and in our church.” The document calls upon Catholics to undergo conversion in their personal lives as well as in their faith communities to end racism in all its forms.

The bishops as a whole have been joined by several local bishops in their admonition. Many have tied the issue of race to poverty and segregation. In his 2003 pastoral letter, “The Sin of Racism and a Call to Conversion,” Bishop Dale J. Melczek of Gary, Ind., went so far as to address the existence of “white status,” which affords whites opportunities that “people of color simply do not share.”

Deacon Miller illustrates Bishop Melczek’s premise. A popular retreat leader and preacher, Deacon Miller said that at times when he enters a church he is approached by people asking if they can help him. “The hidden message being ‘what are you doing here?'” he said.

Vanessa Griffin Campbell, director of the Cleveland Diocese’s Office of Ministry to African American Catholics, said she has had similar experiences while visiting parishes for liturgies or special events. “I’ve walked in our parishes and no one greets me,” she said. “But when I pull out that diocesan card they all come running to me.”

So where to begin, especially when few parishes are as diverse as St. Matthew in Baltimore?

Certainly, McCloud said, to do nothing is wrong.

“We should never avoid the opportunity to first blow off the dust on the Bible,” he said. “Begin with the Bible that says we are all made in the image and likeness of God. The Genesis story makes us all members of the same family.”

Trying to understand the other is an important first step, Deacon Miller said. That can come when the church finds the appropriate language — one that closes the gap between white and black — to talk about race. “If we can’t surface these things,” he said, “we’ll never have healing.

“Don’t restrict or limit God. That’s what happens when we don’t look to see how much beauty there is in every ethnicity. We restrict God and we must not and cannot do that. The fullness of the Catholic Church comes from the fullness of all of us,” said Deacon Miller, a lifelong human rights activist.

He also believes the foundation for the church’s action can be found in Catholic social teaching. The key, however, he explained, is moving beyond the confines of the parish to put that teaching into action. “It’s easy to be a Christian at Sunday Mass, but you’ve got to be a Christian to take it outside those buildings,” he said.

Griffin Campbell in Cleveland coordinates the program A Call to Conversion, a four-part series for parishes in which issues of race are addressed. Under the program participants hear the individual stories of people from various cultural and economic backgrounds. The goal is to create understanding, she said.

“People need to talk to each other and be able to have real honest dialogue,” she said.

“To have an honest conversation, you’ve got to look at what history is in this country and not stereotype what you see in the media,” she said. “What people need to know is to know the history where people come from. It’s about developing relationships.”

The full text of “Brothers and Sisters to Us” is available online at www.usccb.org/saac/bishopspastoral.shtml.