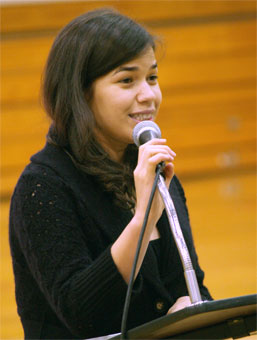 LOS ANGELES – During a candid and open exchange with Catholic high school students in Los Angeles, actress America Ferrera, star of the television show “Ugly Betty,” encouraged young people to overcome any obstacles in the way of achieving their dreams and to take advantage of unexpected opportunities.

She also urged students to become involved in this year’s presidential election, noting that the results will determine the kind of world they will soon lead.

Ferrera was the keynote speaker at a diversity conference Jan. 26 at all-girls Marymount High School in Westwood, which brought together 150 female and male students from 17 Catholic high schools.

“Every opportunity that faces you is really defined by how you accept that opportunity,” said Ferrera, who graduated from El Camino Real High School in Woodland Hills and went on to major in international relations at the University of Southern California.

The 23-year-old actress, who won Golden Globe and Emmy awards in 2007 for her portrayal of Betty Suarez in the comedy “Ugly Betty,” said she knew at a young age she wanted to act. But the obstacles were many.

“My whole life I wanted to be an actress since I was 7 years old. And my whole life I was told by the people around me, the people who loved me most, that this was probably going to be an impossible dream for me. Because you know, 10-15 years ago, there weren’t the sort of faces on television or in film you see now,” she said.

A child of Honduran immigrants, Ferrera recalled that friends and family would tell her, “You’re Latino. That’s not really what they want in Hollywood. You’re short. You’re not the image, you know, of what a beautiful Hollywood star is.”

“And all these things hurt, but they didn’t stop me,” said Ferrera. “All those reasons that everyone said I would never make it are all the reasons why I did make it. All those things that make me very unique – and in their eyes a disadvantage – were the things that opened the doors for me.”

Ferrera said she was able to sign on with a small agency as a teenager, but then spent a year auditioning for parts and never being called back. At 16, she worked as a waitress to pay for acting classes.

“I would sit by my phone and I would cry, ‘When is this going to happen?’” said Ferrera. After persevering for a year, she got a call-back for the Disney Channel film “Gotta Kick It Up.” A month later she landed the lead role in “Real Women Have Curves.” After that the doors were wide open.

Ferrera said that as a college freshman juggling her studies and acting roles, she found herself in another critical moment of self-doubt. Her university courses were exposing her to the many injustices endured by exploited people around the world.

“I thought, how could there be so much going on outside (in) the world and I’m finding myself just following my passion, just doing what I want to do? That felt so selfish to me,” she said.

She took her doubts to her professor, who then told her the story of how he had mentored a young Latina high school student from Belmont High School near downtown Los Angeles. That student asked him to see “Real Women Have Curves” so that he could understand the key struggles in her life.

“And he says to me, ‘If you think you can’t affect the world doing what you love to do, think again,’” Ferrera said.

“Things kind of got a little more clear for me,” she said. “It’s about taking the gifts that are given to you and directing them toward great things and wonderful things, you know.”

Ferrera is traveling and speaking with young adults and encouraging them to get involved in the political process, particularly the upcoming presidential election.

“You know, this election is about you, more than it is about anybody else in this world,” she said. “Because what happens now, who changes the course of this country, is going to determine the world we live in when we’re old enough to be the rulers and the leaders and the people who define what this world is going to be for the next generation. This really is your election.”