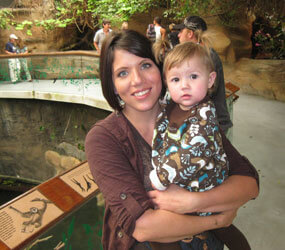 GREEN BAY, Wis. – Melissa Ohden remembers the moment she knew she’d forgiven the mother who had tried to abort her.

“I was just married a year. I was thinking about how I wanted to be a mom, to have a house,” the Sioux City, Iowa, resident remembers. “I was driving on a country road, and all of a sudden it hit me: ‘I’m not different than my mother must have been. She must have been thinking all those things, when she found out she was pregnant with me.’ That was a humbling moment, to realize that she was no different than me, but she made a different decision than me.”

It was 1977 when Ohden’s biological mother, a university student in Iowa, tried to end her six-month pregnancy by a saline abortion.

The abortion failed and Ohden survived. She was soon adopted and, even though her pediatricians believed she would suffer lifelong complications from the abortion attempt, Ohden had no long-term effects.

Today, a mother herself, she speaks about her experience, her biological parents and their families, her adoptive parents and her own daughter, to pro-life groups around the country.

Ohden’s intent with her public speaking is to give a face and a voice to those children who experienced abortion, as she did, but did not survive.

“It’s about being able to reflect the true reality of what abortion is,” she said in a telephone interview with The Compass, Green Bay diocesan newspaper. “We in the pro-life movement talk about unborn children all the time, but we don’t hear them. That’s one reason the Lord saved my life, to talk about that, about my unborn brothers and sisters.”

It’s something that resonates with her audiences.

“Every time I go speak somewhere,” Ohden said, “I am so surprised by the number of people who line up to speak to me. Grandparents, aunts, uncles, brothers and sisters, to tell me their story and tell me how much they are hurting because of an abortion – they are missing out on that person in their lives.”

This is also why Ohden founded For Olivia’s Sake, a nonprofit organization that “seeks to peacefully raise awareness of the intergenerational impact of abortion on men, women, children, families and communities.”

Olivia is her 2-year-old daughter’s name. The name came to Ohden when she was just a few days pregnant in August 2007. She was on Capitol Hill in Washington and preparing to speak when the name came to her. She was thinking about olive branches extended in peace.

“Peace begins in the womb,” she said.

Olivia was born in the very hospital where Ohden’s life almost ended in abortion. It was a tough decision for Ohden, who almost ran out of the birthing classes there and who had always held her breath “every time I drove past the place.”

But it was all part of God’s plan for her healing. In the process, Ohden met a nurse who had been working at the same hospital for 30 years, a nurse who remembered her birth family.

“She cried and hugged me and told me I looked like my grandmother,” Ohden said.

After years of work, searching medical records and filing petitions in court, Ohden was able to learn who her birth parents were. She has not met them but has connected with several relatives of her father, who is now deceased, and with her maternal grandfather.

Although she is striving for forgiveness, anger and fear resurface at times.

Still, Ohden said she cannot remain angry with her birth parents. Nor can she judge them.

“No matter what decision they made in regard to my life, they are my biological parents, and a part of me,” she said. “To reject them would be to reject myself, to hate them would be to hate myself. They are only human, and humans make some terrible mistakes, but it doesn’t necessarily make us terrible people.”

In fact, through what she acknowledges as God’s grace and guidance, she has been able to feel sorrow for her biological parents.

“I can only imagine the amount of pain and suffering that they went through in their lives as a result of this,” she said. “I believe that their hardships far overshadow my own.”

And she adds that God’s grace continues to lead her, this time toward the Catholic Church.

“I’m considering a conversion,” said Ohden, who was raised a Methodist. “I listen to Catholic radio and all I watch is Catholic TV. I feel that connection at a deep level.”

Part of the connection goes back to the hospital where her life almost ended before it began.

“There was a priest who prayed outside the hospital where I was to be aborted,” she said. “And I know he saved my life.”