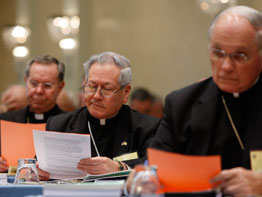 Fears about laws and changes in regulations on abortion that might advance under a new Democratic-run Congress and White House are the central focus of a statement approved by the U.S. Conference of Catholic Bishops Nov. 12 during their annual fall meeting in Baltimore.

The majority of the 830-word, untitled statement focuses on concerns about the possible passage of the Freedom of Choice Act, calling it “an evil law that would further divide our country” and adding that the church “should be intent on opposing evil.”

It warns against interpreting the outcome of the Nov. 4 elections as “a referendum on abortion” and says “aggressively pro-abortion policies, legislation and executive orders will permanently alienate tens of millions of Americans.”

The statement was crafted during the bishop’s meeting and involved a total of nearly three hours of discussion on the topic during executive and public sessions Nov. 11. Under USCCB policies, statements drafted outside the usual committee approval process may be issued by the conference president on behalf of the bishops.

The final product was written under the supervision of Cardinal Francis E. George of Chicago, USCCB president, after the bishops weighed in with a wide range of recommendations about its content, tone and writing style. After an overnight writing session, the statement was read by Cardinal George to the body of bishops, who greeted it with applause.

It starts by saying the bishops “welcome this moment of historic transition and look forward to working with President-elect (Barack) Obama and the members of the new Congress for the common good of all.”

“We want to continue our work for economic justice and opportunity for all; our efforts to reform laws around immigration and the situation of the undocumented; our provision of better education and adequate health care for all, especially for women and children; our desire to safeguard religious freedom and foster peace at home and abroad,” it said. “The church is intent on doing good and will continue to cooperate gladly with the government and all others working for these goods.”

The statement went on to explain church teaching that life is a gift from God and that “a good state protects the lives of all.”

The statement elaborated a range of concerns about the proposed Freedom of Choice Act, including concerns that it would “deprive the American people in all 50 states of the freedom they now have to enact modest restraints and regulations on the abortion industry.” It said the bill “would coerce all Americans into subsidizing and promoting abortion with their tax dollars,” and would counteract any efforts to reduce the number of abortions in the country.

Statutes requiring parental notification when minors receive abortions, informed-consent provisions and bans on procedures such as partial-birth abortion would also be prohibited, the statement said. It raised concern that abortion clinics would no longer be regulated, that a current ban on federal funding of abortion would end and that it would “have lethal consequences for prenatal human life.”

Catholic health care institutions and Catholic Charities would be threatened, it said, because the bill would have a “destructive effect on the freedom of conscience of doctors, nurses and health care workers whose personal convictions do not permit them to cooperate in the private killing of unborn children.”

The Freedom of Choice Act has been introduced in at least the last four sessions of Congress without any action. Other versions go back to the early 1990s. In 1993, when Democrats controlled both houses of Congress, the Senate Labor and Human Resources Committee approved that year’s version. But it never reached a floor vote and saw no action in the House.

In a January 2008 statement, Obama said he would support passage of the Freedom of Choice Act. The latest version introduced in April 2007 is intended to take effect if Roe v. Wade is overturned, re-establishing federal protection of legal abortion, regardless of what state laws might exist.

The statement from the bishops noted the recent election “was principally decided out of concern for the economy, for the loss of jobs and homes and financial security for families.”

If the election “is misinterpreted ideologically as a referendum on abortion, the unity desired by President-elect Obama and all Americans at this moment of crisis will be impossible to achieve,” it said. Besides alienating tens of millions of people, erasing restrictions on abortion “would be seen by many as an attack on the free exercise of their religion,” it said.

The statement concluded by thanking “all those in politics who work with good will to protect the lives of the most vulnerable among us,” and reiterating the bishops’ desire “to work with all those who cherish the common good of our nation. The common good is not the sum total of individual desires and interests; it is achieved in the working out of a common life based upon good reason and good will for all.”

It said the bishops’ prayers accompany Obama and his family and those “who are cooperating with him to assure a smooth transition in government.”

During discussion of the statement at the bishops’ meeting, some bishops raised the point about not taking the election results as a green light for changing abortion policies. Others seemed to prefer that the statement take on other issues, such as how the church responds to Catholic politicians whose political actions seem to conflict with church teaching.

Bishop Joseph F. Martino of Scranton, Pa., said though he realized the statement would not address that topic “we are going to have to speak as firmly as possible to Catholic politicians who are not merely reluctant to vote pro-life, but are stridently anti-life.” He noted that in ages past the U.S. bishops took canonical measures against Catholic politicians who supported institutional racism.

“We have to have something like that,” he said. “I cannot have the vice president-elect (Joseph Biden) coming to Scranton (his childhood home) saying he learned his values there, when his values are utterly against the teachings of the Catholic Church.”

Some bishops encouraged narrowing the statement’s focus; yet others wanted it expanded in various ways, including inserting quotes from Pope John Paul II.

“That was a message that resonated with the prominent Catholics who decided to support him and it may be the basis for seeking common ground,” he said.

Some bishops recommended the statement specifically not take an attacking posture, and instead seek a “prophetic voice.”

Bishop Donald W. Trautman, of Erie, Pa., said the tone should be “prophetic, challenging … strong, in the best biblical tradition.”

Bishop Cupich said it was important the statement be prophetic. “What we need is a prophecy of solidarity, speaking for those without a voice, for the community we serve and the nation we live in,” he said. The statement, he said, should be perceived as coming from bishops who are acting “as caring teachers.”