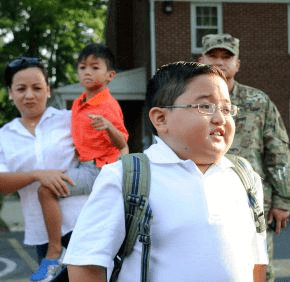 By Nancy Menefee Jackson
Special to the Review
ABERDEEN – When U.S. Army 1st Sgt. Bebert Baylosis transferred here in June 2014, enrolling their children in St. Joan of Arc School was an easy decision for him and his wife, Brendalyn.
She is a product of Catholic schools. The second and third of their three sons, Roman and Masen, had attended Catholic school in Georgia, their previous post. Roman’s favorite subject is math, and entering fourth grade, he was excited to be at a STEM (science, technology, engineering and math) school.
The Baylosis family, however, didn’t figure that another plus would be the school’s location – a 40-minute drive from the world-renowned Johns Hopkins Hospital in Baltimore.
Last fall, Roman began having trouble with his balance and vision. Doctors discovered a germinoma, a type of deep-seated brain tumor that occurs in children, and Roman was referred to Dr. George Jallo, a pediatric neurosurgeon who specializes in brain tumors.
Roman’s tumor was not removed surgically; instead he underwent four cycles of chemotherapy and daily radiation at Hopkins.
His mother had not wanted to relocate the family to Harford County, but of its proximity to Hopkins, she said, “I don’t know if everything happens for a reason, but I guess it does.
“God is great. He’s always with us.”
Radiation treatments required daily trips to Baltimore. Brendalyn picked up Roman from school before the day’s last class and headed to Hopkins.
“He’s always been in good spirits – from the time he was diagnosed, he doesn’t whine and he doesn’t complain. He takes whatever medicine he has to take. The nurses and doctors love him.”
Virginia Bahr, the principal of St. Joan of Arc, said families, faculty and staff supported the Baylosis family with prayer and tangible donations, including a $500 gift card that the family used for parking at Hopkins.
“The school was so great,” Brendalyn said. “I was overwhelmed. We had moved in June. I found out (about Roman’s diagnosis) Dec. 1, and we did a biopsy Dec. 8. Everything was just a whirlwind.”
The school’s support included gift cards for restaurants since they didn’t have time to cook, and cards of encouragement.
“Every little thing helped,” Brendalyn said.
The school community organized the Holy Walkamolies for the American Cancer Society’s Relay for Life in Havre de Grace last June, raising more than $5,200. Roman and his family led the first lap of the walk.
“Cancer is a disease that affects the whole family,” said Bahr, the school principal. “It’s a cause we support each year, and it was particularly meaningful as we tried to support Roman. It’s a call for us as Catholic Christians to support each other.”
Roman’s teachers, Wendy Baur and David Brothers, worked with him and his mother to keep his school work on pace during treatments. Baur tutored him this summer, and St. Joan of Arc will work with Harford County to develop an individualized education program (IEP) for him this fall.
“He loved to go to school,” Brendalyn said. “Even when he was sick he wanted to go to school. The teachers are outstanding.”
She was also moved by the kindness his classmates displayed.
“His classmates help him with his bags and they wait for him when he walks slowly,” she said.
Lining up with his fifth-grade class on the parking lot Aug. 24 for the first day of school, Roman, now 10, is in stable remission. (In order to be in full remission, he needs to be one year post-treatment).
Because of the tumor, the 10-year-old lost the vision in his left eye, has some short-term memory loss, and diabetes insipidus. He undergoes physical and occupational therapy, and an MRI every three months.
He said he was “very excited” to be back at school, where he likes to play Four square with his friends, and was eager to talk about his summer.
“We went to Seattle and to the Space Needle,” he said. “And I read a reading in my aunt’s wedding.”
His older brother, C.J., 19, is a student at Virginia Military Academy in Lexington. When asked what he wants to be when he grows up, Roman pondered the question solemnly and then answered cheerfully, “I don’t know – I have to think about that – I think a dentist, maybe.”