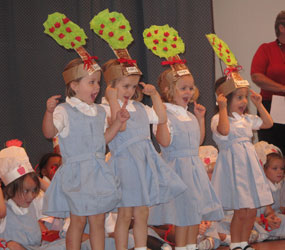 For the 110 students of Frederick’s Visitation Academy, Apple Dumpling Day is as American as, well, apple pie.

Students, families, administration, supporters and politicians descended upon the scenic campus of the all-girls elementary school to dine on the treat, which looks like a wrapped apple pie. The school’s Apple Dumpling Day dates back to 1846.

Children dipped into a scoop of vanilla ice cream and the apple desserts in a scene right out of a Norman Rockwell painting.

“It’s a really nice tradition here because it brings us together,” said fifth grader Giulianna Kuker. Apple Dumpling Day has connected the school’s students and administration since 11 Visitation Sisters replaced the Sisters of Charity at what was then St. John’s Female Benevolent and Frederick’s Free School. Students wanted to boycott the new order’s arrival.

The school’s neighbors, sympathetic to the Visitation Sisters, made them a dinner. The sisters shared the meal with students and they bonded over dessert, apple dumplings. It was the first of what became an annual event.

The tradition was suspended during the late 1990s and early 2000s as the Visitation Sisters aged and were no long mobile. When the nuns left the school in 2005, the school community decided to restart Apple Dumpling Day to pay homage to the order.

“As a school, we were feeling sad and hurting that they were no longer here,” said the school’s admissions director, Carol Guaccero. “It really solidified that transition.”

Parents baked the dough and students picked the apples from a tree in the school’s courtyard. They assist in the baking of the dumplings on the day before Apple Dumpling Day. More than 500 apple dumplings were served.

“There’s something about sharing food that brings a community together,” Guaccero said. “Maybe it goes back to the Eucharist and what that means. Whenever someone visits here, we share food because it is an important part of showing your love.”

Students count down the days to Apple Dumpling Day.

“All the girls who graduate come back to the school because they love Apple Dumpling Day,” said fifth grader Alina Gregory.

All students, some in baker’s hats, proudly sang about Apple Dumpling Day in a ceremony.

Principal Paula Redman, who came to the school this fall, has fallen in love with the school’s tight-knit community. Standing in the school’s school scenic courtyard, she saw families bonding with one another, just as the Visitation sisters did with their students.

“It’s a throwback and, yet, there are some things that are timeless,” Redman said. “Traditions just engender that sense of belonging.”