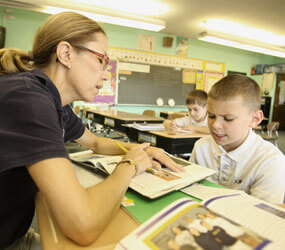 Carley had been diagnosed with dyslexia while a student at Sacred Heart of Mary School in Graceland Park. Kim, a physical education teacher, was paying substantial money for an outside tutor, but some learning connections for her daughter weren’t being made.

The answer was right under her nose at Sacred Heart of Mary, in its PRIDE program.

Carley enrolled in PRIDE – Pupils Receiving Inclusive Diversified Education – and promptly acquired coping skills that helped her blossom. At her exit presentation in eighth grade, she chose actor Henry Winkler, known as “The Fonz” on “Happy Days,” as her subject. Winkler, like Carley, is dyslexic.

“She was so good,” Belmore said, “that she tore the house down. She had them crying.”

PRIDE, which works with students of average to above average intelligence who have a learning disability, has filled an important need over its 16 years in the Archdiocese of Baltimore.

Sacred Heart of Mary principal Pamela Walters, who will assume the same position at St. Clement Mary Hofbauer, is a true believer in the program.

“This population is the lifeblood of who we are,” Walters said, “and transformed everything that we are.”

The program costs an additional $1,700 each year. To be admitted, students take psychological-educational tests in the public sector to determine their specific learning needs.

PRIDE students follow an individualized education plan that certified special education teachers use in small group settings for language and math courses. Students discover their best way to communicate the information they learn. They participate in the mainstream in subjects like science, religion and social studies, and receive additional assistance in organizational skills.

“We just want them to be their own personal best,” PRIDE intake coordinator Mary Jo Puglisi said.

Walters said 15 percent of Sacred Heart’s students are enrolled in PRIDE. The goal is about 10 percent at the larger St. Clement Mary Hofbauer.

It took a full year for Sacred Heart of Mary teachers to be trained. St. Clement Mary Hofbauer will have about half that preparation, so its teachers are observing Walters and her current staff to get up to speed.

“We’re starting from square one,” Puglisi said. “The St. Clement teachers understand these kids are already sitting in their classrooms. They’re doing the best they can with the resources they have.”

Walters said PRIDE made her a better teacher and that her training allows her to earlier recognize a student’s learning issues.

“The greatest gift we’ve had were the ‘imagine ifs’ here,” Walters said of previously frustrated students. “A student isn’t being threatened to get kicked out every year or going to summer school. Instead, they’re the student council president.”

Attending a school with the program has also been educational for students not in the program.

Eighth-grader Sarah Stefanski said: “Sometimes they (PRIDE students) will come in really quiet and then they’ll learn to be open with everyone because we understand them. They just do better and better.”