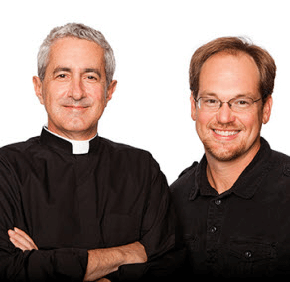 As visitors enter the Church of the Nativity in Timonium, for the first time, they notice the café tables where parishioners can sip coffee after Mass. Flatscreen TVs are everywhere.

If they walk farther in, they come across the preschoolers’ room and classrooms where the older children participate in Sunday morning activities.

Through glass windows, they can also see the pews in the church itself and more TV screens.

If it’s Sunday, they rub shoulders with the people gathered in the church, members of a parish that is growing in population, volunteerism, giving, and—the pastor has reason to believe—in spirituality.

Yes, it’s a Catholic church. But the church experience there is dramatically different from that of a traditional church. And, the pastor, Rev. Michael White, ‘80, and Tom Corcoran, ‘96, are the men behind the changes.

From Frustration to Creation

To understand what Church of the Nativity has become, you need to look back 15 years to the day Fr. White was assigned there. He had never worked in a parish. And when he arrived and saw Nativity’s status, with an aging population and no new families joining, he didn’t particularly want to be there.

He knew he needed help, and he asked his former English professor, Carol “Sue” Abromaitis, Ph.D., to recommend someone. She told him to call Corcoran, and Fr. White brought him on as his youth minister. Together, they tried to figure out what was working well in the parish.

Fr. White, who had studied at the Gregorian University in Rome and served for five years as personal secretary to William Cardinal Keeler, was surprised to find out how the parish was operating.

It was obvious to both Fr. White and Corcoran—now the church’s pastoral associate—that the parish was stagnant, and they needed to find a new approach.

“Churches these days are facing some pretty incredible challenges as the world changes,” Fr. White said. With participation in organized religion dwindling overall, he knew that only an intentionally growing church would survive. “People feel church is boring and it’s bad, and they’ve lost a sense of the sacraments. They’re looking for relevancy. They’re looking for truth.”

Fr. White and Corcoran started searching for answers. They learned that 75 percent of Catholics who have left the Catholic Church to join another church, have joined Evangelical churches, so they started there. They traveled to Evangelical churches and attended conferences to learn why those churches were growing.

Reflecting on their Loyola experience, they found themselves seeking truth and asking, “What is the truth about healthy churches?” Fr. White said. “We went all over the country and learned from some pretty impressive churches.”

Along the way, they realized they needed to make changes. And they identified concrete steps they could take.

They focused on the weekend experience, including adding a rock band and preaching a message that parishioners could put into practice during the week. They added greeters in the parking lot and inside the church. They created strong children’s programming so parents could focus on the Mass. The parish began to grow.

About two years ago, Corcoran suggested to Fr. White that they should write a book together to share some of what they had learned with other parishes and faith communities—both Catholic and Protestant.

Now they are counting down to February, when their book, Rebuilt: Awakening the Faithful, Reaching the Lost, and Making Church Matter, will be published by the University of Notre Dame’s Ave Maria Press.

“The impact we want to have is on Catholic parishes,” said Corcoran, who lives in Parkville, Md., with his wife, Mia, and their five children—and a sixth on the way. “We want to offer just a little bit of inspiration and hope. There are people who care about the Church and feel frustrated. This can be comforting.”

The book offers principles that can apply anywhere, they say. “Whatever style church you have—contemporary, traditional—you can have a healthy church, just as people of every age can be healthy,” Fr. White said. “We are trying to create an irresistible environment.”

As the parish grew, of course, some of the former parishioners, who were dissatisfied with the significant changes, left. And some Catholics—both liberal and conservative—distrusted the changes at the parish.
But the parish also gained a new vibrancy, a new sense of community, and brought many former or less-active Catholics home.

“I think that’s the reality in changing everything. In some ways it’s going to happen,” Corcoran said. “We’re not trying to change doctrine.”

The authors don’t delve into any of the typical controversial issues. “Our book doesn’t talk about celibacy or women priests or any of the hot-button issues. We just go right to the bottom line,” Fr. White said.

Support from the Loyola Family

Abromaitis is one of the people who has endorsed their efforts. She also introduced them to Tony Levero, ‘12, when they needed an intern to help with the research and compile the footnotes.

“My taste is very different from the taste of the liturgy there, but the liturgy is orthodox and solid, and the evangelization is there. And the growth of the parish is remarkable,” Abromaitis said. “The book is very readable. My husband (Mike Abromaitis, ‘62) found it inspiring and hopeful. I’m not talking optimism. I’m talking hope.”

Abromaitis, who prefers to attend Mass featuring no music, nonetheless gives Fr. White credit for bringing new life to his parish. “Anybody you talk to is going to tell you that he is one of the great sermonizers. He is just magnificent.”

“I think it will be a bit of a barn burner when it comes out,” said Fr. Roach, who is pastor of St. Bartholomew Roman Catholic Church in Manchester, Md. He found the book to be “gutsy” and plans to implement some of Fr. White’s suggestions on stewardship.

“Liturgically, we’re 180 degrees apart. I’m about as old time and high church as you can be,” Fr. Roach said. “My whole ecclesiology, my thoughts on how a church should be are very different than his, but his chapters on stewardship and preaching are spot on. Those two chapters alone make the book worth reading. It’s some of the best stuff I’ve ever seen.”

Meanwhile, when Timothy Cardinal Dolan, archbishop of New York, wrote the book’s preface, he said that the book should be read by every parishioner in the United States.

This story originally appeared in Loyola Magazine in December 2012. Reprinted with permission.