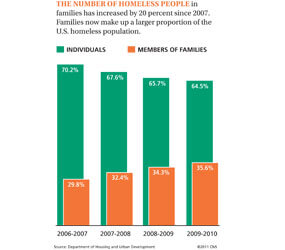 WASHINGTON – Out of work and living in a shelter, Jasmine, a single mother, has one thing on her mind: reuniting her family.

Son Emanuel, 3, is staying with Jasmine – who asked that her last name not be used – at the Ozanam Family Shelter in Edison, N.J., run by Catholic Charities of the Diocese of Metuchen. But 5-year-old daughter Monet is not; she’s with her grandmother, the mother of Jasmine’s former boyfriend.

Jasmine turned to the shelter in mid-June, after she and her boyfriend decided it was time to go their separate ways. For Jasmine, Emanuel and Monet, finding even a modest apartment in northern New Jersey is out of the question. Rent for a one-bedroom apartment typically runs $900 a month; a two-bedroom place runs $1,500.

“Two kids and an adult can’t live in a one-bedroom apartment,” Jasmine said. “It’s either live on the streets or come to a shelter.”

Jasmine’s predicament illustrates a growing trend across the country: Families are making up a growing proportion of homeless people. Shelter providers told Catholic News Service they are seeing more families who have been forced to abandon stable living arrangements and thrust into the uncertainty of life on the streets.

Wesley R. Moore, division director for housing and social concerns for Catholic Charities in Metuchen, told CNS that many parents landing in the Ozanam Family Shelter – single or married – are facing unemployment or underemployment, making it difficult for them to make ends meet.

The 2010 Annual Homeless Assessment Report by the Department of Housing and Urban Development found that since 2007, the number of people in families who are homeless has increased by 19.8 percent. Based on reports from shelter providers nationwide, HUD estimates that people in families now make up 35.6 percent of the country’s homeless population on any given night. That compares with 29.8 percent in 2007.

Neil Donovan, executive director of the National Coalition for the Homeless, said his organization believes that the federal government’s count may be off by as much as 20 percent because not all shelters report their statistics on homelessness every year and that people who stay out of shelters are not part of any count. He urged HUD and the U.S. Census Bureau to do a better job of identifying who’s homeless and why they are homeless so that the reasons people are without a home can be better addressed.

HUD’s data are not meant to downplay the size of the traditional homeless population: men. In fact, 62 percent of all sheltered homeless people in 2010 were male. The largest group – 37 percent – were men 31 to 50 years old.

HUD found, however, that a growing number of single men were homeless because of a lost job than because of alcohol or drug abuse.

The typical homeless family, HUD reported, is a mother with two children. The report also cited a growing number of two-parent families experiencing homelessness as victims of layoffs and real estate foreclosures.

Jean Beil, senior vice president of programs and services at Catholic Charities USA, sees the movement of people from homeownership into the rental market as a primary reason for the increase in homelessness among families. With more people seeking to rent, prices move upward, forcing some at the low end of the market into the street, she explained.

“Definitely we’ve seen an increase in the desperation of people calling,” Parke said.

Karen Wallensak, executive director of the Catholic Charities Housing Resource Center in the Archdiocese of St. Louis, said her agency has seen homelessness on the rise in suburban and rural areas, especially among two-parent families.

“This is due primarily because of the economic crisis and the foreclosure crisis,” she said.

The new wave of homelessness has prompted shelter providers to develop new programs to move families into more stable environments. Transitional housing programs that help families return to independence are developing rapidly, but the need still exceeds the number of slots available across the country.

“Ultimately, we want the clients to be self-reliant,” explained Lindsay Cuomo, case manager at the Ozanam Family Shelter. “We try to point them in the right direction. We want them to secure these things on their own.”

For Jasmine, the search for a home begins with a job. During the past four years, she said she has been employed for only three months, and then as a personal shopper taking home $60 to $70 a week. She knows that’s not going to go far in paying the rent.

Most of the jobs Jasmine has found, however, pay the minimum wage. In New Jersey, that’s $7.25 an hour.