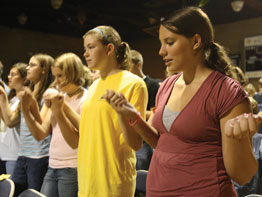 Christine Tellup bounced up and down and danced with her friends inside a darkened gymnasium at The John Carroll School in Bel Air Sept. 28. Just a few feet away, some of the 14-year-old’s favorite music artists, Josh Blakesley and Jackie Francois, were wailing away on one of their hits.

The scene had most of the underpinnings of a rock concert. Different colored lights moved across stage and reflected off the faces of teenagers pressing to get closer. As much of the estimated crowd of more than 300 danced to the music, their neon glow stick necklaces left trails of colors in the air.

“I love all of Josh Blakesley’s stuff,” a breathless Christine said. “I listen to it a lot. I’m really excited to get Jackie’s new CD when it comes out in November.”

Absent in all of the organized chaos was the debauchery that typically comes with a rock concert. In its place was an evening of Catholic celebration and evangelization.

The event, advertised as “Catholic Quest” and “Immersed in God’s Love” by organizers, featured a Mass celebrated by priests from various Harford County parishes and the concert with Mr. Blakesley and Ms. Francois, two emerging Christian rock artists.

“We’re trying to get the county to come together as one Catholic family,” said Steve Lozniak, a parishioner of St. Joan of Arc in Aberdeen and one of the event’s organizers.

It was a little more difficult to accomplish that mission, as the second-year event was moved from a grassy area on the John Carroll campus thanks to a persistent rain throughout the weekend. Gone was a bonfire that had been popular in last year’s inaugural event and in was a slightly smaller crowd than the 500 who attended in 2007.

“We were suspect about the number of people who were going to come, but it was good considering the weather,” said Father Samuel V. Young, the pastor of St. Joan on Arc who celebrated the pre-concert Mass.

The gathered crowd for the evening was mostly teenagers from local parishes like St. Joan of Arc, St. Margaret of Bel Air and St. Ignatius, Hickory. Despite the dodgy weather all weekend, enthusiasm remained.

CDs by Mr. Blakesley and Ms. Francois sold at a brisk clip. Christine, a member of St. Joan of Arc, said she was eagerly anticipating Ms. Francois’ latest album in November after hearing her perform live.

On stage, the duo effortlessly alternated blended song and spirituality. With one light shining on him, Mr. Blakesley stopped mid-song and prayed with the crowd, saying Jesus was “the source of my redemption.”

When the songs picked up tempo, the crowd once again was jumping up and down with fervor.

“Usually when you go to Mass, it’s kind of reserved, but here you can let it all out and praise God with all you got,” Christine said.