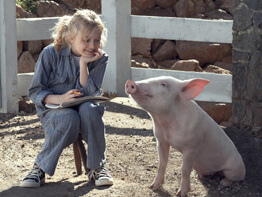 Those who complain that they don’t make quality films “like they used to” should get out more often and see what a rich palette of films – both domestic and foreign – are available, provided one chooses carefully. And, so too, the performances this past year by such present-day luminaries as Will Smith, Renee Zellweger, Brad Pitt, Edward Norton, Naomi Watts and Laurence Fishburne bear favorable comparison with the stars of old.

There was a surfeit of superior films in 2006, with solid moral underpinnings, so much so that narrowing the field down to 10 was more difficult than ever.

From powerful anti-war films to inspirational true-life (though highly disparate) stories to a superior adaptation of a literary classic, they ran the proverbial gamut.

Some, but not all, of our top 10 are family-friendly, but beyond those, we’ve also chosen 10 other films worthy of inclusion in our separate family category, headed by “The Nativity Story,” one of the best recent biblical films; classy remakes of “My Friend Flicka,” “Charlotte’s Web” and “The Courage of Lassie”; and stories involving fighting against the odds.

So, here they are, in alphabetical order, followed in parentheses by their USCCB Office for Film & Broadcasting classification and Motion Picture Association of America rating:

– “Akeelah & the Bee”: Irresistible story about a South Los Angeles 11-year-old loner who reluctantly agrees to compete in a national spelling bee – under the tutelage of an emotionally fragile English professor. There are inspiring messages about conquering fears, winning by honest means, the strength of community, and, above all, the beauty and potency of words (A-I; PG).

– “Babel”: Quietly powerful film charting three interconnected stories: an American couple stranded in Morocco; the deaf-mute teenage daughter of a widowed father in Tokyo who achingly longs for love; and a Mexican governess and her nephew who take her two young charges across the border with disastrous results. Conveys an admirable message about a shared global humanity and the senselessness of violence (L; R).

– “Flags of Our Fathers”/”Letters From Iwo Jima”: It wouldn’t be fair to separate these companion World War II dramas that tell the story of the pivotal Battle of Iwo Jima from the American and Japanese perspectives, respectively. “Flags” recounts the story of the iconic flag-raising photograph, while exploring themes of heroism and the power of images to exploit and inspire. “Iwo Jima” illustrates our shared humanity and shows ignorance as a root of international conflict, by focusing on Japanese soldiers entrenched on the island as they prepare for the U.S. invasion (both A-III; R).

– “Joyeux Noel”: Extremely moving World War I tale of soldiers – Scottish, French and German – who spontaneously agree to a cease-fire on the Western front on Christmas Eve, intermingle and bond on a humanistic level, to the eventual disdain of their superiors. Delivers a powerful message about the senselessness of war (A-II; no rating).

– “Little Miss Sunshine”: Immensely likable film about an Albuquerque, N.M., family who trek to Los Angeles in a creaky van so their daughter can compete in a beauty pageant. A refreshingly offbeat tale that, underneath the zaniness and some troubling elements, comes over as an extremely positive validation of family and genuine values (L; R).

– “Miss Potter”: Charming, beautifully crafted story of “Peter Rabbit” author Beatrix Potter and her bittersweet romance with the awkward young publisher of her books, under the disapproving eyes of her class-conscious parents in turn-of-the-century England. The kind of quality film that’s all too rare (A-I; PG).

– “The Painted Veil”: Excellent film adaptation of W. Somerset Maugham novel set in the 1920s about an English doctor who vengefully takes his adulterous wife to a remote Chinese village during a dangerous cholera epidemic there, and how, over time, they establish a deep and abiding love. The intelligent love story, spiritual journey and ultimate redemption of its heroine, are movingly conveyed (A-III; PG-13).

– “The Pursuit of Happyness”: Feel-good tale based on the true story of a selfless medical supply salesman who raises his 5-year-old son on his own while enduring financial struggles, homelessness and other vicissitudes in order to pursue a new career path as a stockbroker. The protagonist does all he can to nurture his son under trying circumstances and projects admirable decency throughout (A-II; PG-13).

– “Sophie Scholl”: Gripping true-life drama chronicling the final six days in the life of a 21-year-old German college student executed by the Nazis in 1943 for distributing anti-war leaflets at her university, resulting in a quietly powerful testament to bravery while examining themes of freedom of conscience and peaceful resistance to tyranny and imparting a strong anti-war message (A-II; no rating).

– “United 93”: Tense, well-acted documentary-style drama about the hijacking of an aircraft on Sept. 11, 2001, when passengers fought back, downing the plane in the ensuing melee and preventing destruction of a probable Washington target. A testament to heroism and a vivid cautionary tale, sensitively handled (A-III; R).

– “Aquamarine”: Sweetly told modern-day fairy tale about two 13-year-old best friends who help a mermaid washed ashore during a storm experience true love in the hopes that the magic wish rewarded them will undo the impending move of one of the girls to Australia. With a delightful mix of fantasy, comedy and romance, the film scores points for showing that authentic love can express itself in varied ways (A-II; PG).

– “Cars”: Delightful computer-animated movie set in a world of anthropomorphic autos about a cocky hot rod which, while en route cross-country to compete in a prestigious championship, is unexpectedly detained in a neglected desert town where his growing friendship with the town’s four-wheeled residents effects a change of heart regarding fame in the fast lane. Imparts a charming message about taking the time to appreciate what really matters in life (A-I; G).

– “Charlotte’s Web”: Charming live-action adaptation of E.B. White’s beloved children’s classic about a runt pig who is saved from slaughter by the love of a young girl, a barnyard of computer-enhanced talking animals, and the fancy web work of a wise spider. Presents simple, timeless themes of friendship and the bittersweet cycle of life (A-I; G).

– “Eight Below”: Winning family-friendly adventure inspired by real events about a team of sled dogs left behind at a remote Antarctic research station who struggle to survive in the inhospitable environment. The film balances action and heart-tugging emotion in telling its captivating tale of friendship and canine courage (A-II; PG).

– “Everyone’s Hero”: Charming Depression-era animated tale about a young boy who sets out – with the help of a magical talking baseball – to recover the stolen lucky bat of his idol, Babe Ruth, during the 1932 World Series. Visually delightful fable with heart and a simple but winning message about familial love and perseverance (A-I; G).

– “Flicka”: Warmhearted story set in contemporary Wyoming about a strong-willed teen who, defying her tough but loving dad, determines to tame a spirited wild mustang, ultimately bringing father and daughter closer together. A sentimental message about family bonds, youthful ambition and the passing of the American West (A-I; PG).

– “Happy Feet”: Computer-animated fable set in the Antarctic about a young emperor penguin whose inability to carry a tune and propensity for tap dancing gets him banished by the puritanical elders who blame him for the colony’s dwindling fish supply. Commendable themes of love, family and self-worth (A-II; PG).

– “Lassie”: Handsome adaptation of Eric Knight’s original novel, “Lassie Come Home,” about an impoverished Yorkshire mining family in the 1940s that reluctantly sells its beloved dog to a rich nobleman who takes the dog to Scotland where the collie escapes and attempts the long trek back home. The scenic vistas are breathtaking and the story appealing, making this fine family viewing (A-I; PG).

– “The Nativity Story”: Dramatization of the New Testament birth narratives from the Annunciation to the birth of Jesus gets the prestige treatment in an artful, reverent and affecting retelling, focusing on Mary and Joseph’s relationship, poignantly illustrating the humanity beneath the halos (A-I; PG).

– “Opal Dream”: Gently charming tale set in an Australian opal mining colony about an 8-year-old girl heartsick over the disappearance of her two imaginary friends, the search for whom causes unintended consequences resulting in the locals turning against her father. Celebrates themes of family, community and the value of childlike faith (A-II; PG).