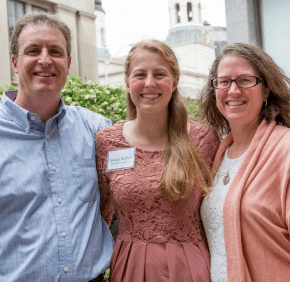 Mount de Sales Academy had wanted to surprise senior Jessica Brinker, one of 25 teens across the Archdiocese of Baltimore honored with Eagle of the Cross awards for 2016, but the May 18 award ceremony came before the Catonsville all-girls school’s honors assembly.

“They called me into the office and said, ‘Hey, this was supposed to be a surprise, but we have to tell you now, and it’s kind of a big deal,’” Brinker recalled.

The 18-year-old parishioner of Our Lady of the Fields in Millersville said she was excited for the honor, which was created by the National Federation of Catholic Youth Ministry for youths who exhibit special dedication and commitment in serving their peers and youth ministries.

“I’ve been really blessed to be able to take a leadership role at both my school and parish,” said Brinker, who is finishing her term as student body president at the former and serves as a peer minister at the latter.

In his remarks to the 13 honorees who were able to attend the ceremony at the Catholic Center in Baltimore, Archbishop William E. Lori noted that extracurricular activities such as Brinker’s point to something deeper.

Along those lines, he exhorted the young men and women to think of the futures toward which they are accelerating not only in terms of a 70- or 80-year human lifetime.

“What we do here and now will affect our happiness for all of eternity,” the archbishop said.

He recalled the words of Blessed Pier Giorgio Frassati, a mountain-climbing young man from a wealthy Italian family who died at 24 in 1925 from poliomyelitis, which doctors believed he caught from the poor and sick people he had befriended and cared for.

A famous photo, taken the year he died, shows Blessed Pier engaged in some vertical rock climbing on a mountainside. On the back, he had written, “Verso l’alto,” or “Toward on high.”

He encouraged the youths to continue to share in the sacraments and to pray frequently.

“That does not mean that every time you sit down to pray, you’re going to think it’s the best experience you’ve ever had,” Archbishop Lori said.

He recalled admitting to his own spiritual director that he had recently fallen asleep, twice, while praying in the early morning.

“That’s not too bad,” was the director’s response. “You’re actually less trouble to the Lord when you’re asleep.”

The archbishop also advised the honorees to surround themselves with like-minded friends who will support them in their commitment to God and the church, and to listen to God’s voice.

“If you haven’t already experienced it, and I think you have, God will occasionally whisper in your ear,” Archbishop Lori said. “These are not ‘sweet nothings’ – they are sweet somethings.”

For Brinker, the immediate future includes a trip to Krakow for World Youth Day.

“I just think it’s going to be an incredible experience,” she said, adding that she is especially looking forward to seeing the former of St. John Paul II, and even visiting the bakery he frequented, now known for small white sweets dubbed “pope cakes.”

Longer term, she will attend St. Vincent College in Latrobe, Pa., majoring in integrated science with a “biology and physical therapy track.”

“I really like to help people,” Brinker said. “I’ve always known I wanted to do something medical, but I’m a little squeamish.”

She added that she plans to continue her service in campus ministry in college, though she will miss the Dominican Sisters of St. Cecilia that help staff Mount de Sales.

“I’ll just miss having them in the halls, so bright and lively, and being able to have a conversation with them about anything,” Brinker said.

‘Praying in color:’ Franciscan shrine in Ellicott City is hub for iconographers

Lifeblood of the church: Engaging youth at Towson University