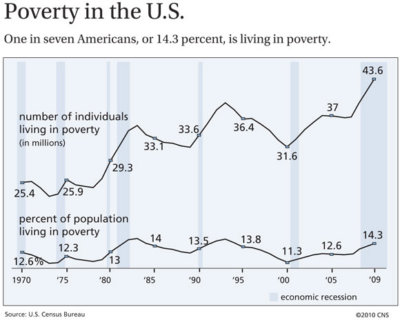 WASHINGTON – Catholic organizations expressed dismay over the Sept. 16 announcement from the U.S. Census Bureau that the number of Americans living in poverty in 2009 rose to 43.6 million, or 14.3 percent of the population.

The bureau also reported that a record number of Americans – about 50.7 million – carried no health insurance. The number of uninsured is the highest since the Census Bureau began compiling such data in 1987.

The statistics on the uninsured “provides fresh evidence that health reform was a necessary and important step toward creating a system that works for everyone,” Sister Carol Keehan, a Daughter of Charity who is president and CEO of the Catholic Health Association, said in a statement.

“The new data is not surprising given the toll the recession has taken on working individuals and families,” the statement said. “For the first time since the Census Bureau has been reporting on the number of uninsured, however, we can look to the future with some hope because health reform will eventually enable 32 million people currently without health coverage to obtain meaningful, affordable insurance.”

The government’s announcement came five days before Catholic Charities USA’s planned Sept. 21 release of its 2009 survey of agencies and affiliates. The agency said more than 9 million people nationwide sought services in 2009, a 7.5 percent jump from the previous year.

“Unfortunately, (they) come as little surprise to those who have been working closely with the growing population for whom poverty has become a daily reality,” he said. “We have not seen numbers like these since President Lyndon B. Johnson waged his war on poverty and frankly, are astounded the nation has done so little to address the poverty crisis that is sweeping our country.”

Father Snyder called upon the country to “re-examine our failing system of safety nets.”

“CCUSA sees every one of the 43.6 million people who lived in poverty in 2008 as members of a growing chorus who are begging our nation to think and act anew to solve this tragic epidemic affecting tens of millions throughout the country,” he said.

At Network, the lobbying group said it was “deeply disturbed by Washington’s continued inability to effectively address our nation’s rising poverty rates.”

Particularly alarming, the organization said, was that the data showed more than a quarter of Hispanics and African-Americans lived in poverty in 2009.

“These poverty statistics underscore the grim fact that people who benefitted the least from the last economic boom are the one who are suffering the most in this severe recession,” said Sister Simone Campbell, a Sister of Social Service who is Network’s executive director.

“Government policies of both parties have failed the working poor in our country. It is a scandal in the richest country in the world that one in seven people here live in poverty,” she said.