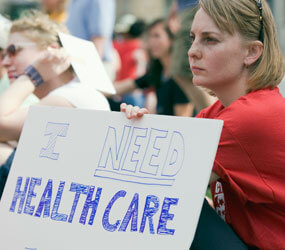 WASHINGTON – Although the ultimate fate of health reform legislation in the U.S. Congress remained up in the air as the end of 2009 neared, one thing is certain: With their unequivocal call to keep the legislation abortion-neutral, the U.S. bishops had a strong influence on the debate.

The role of the U.S. Conference of Catholic Bishops in the debate over health care reform drew criticism and praise, depending primarily on where the commentators stood of the abortion issue.

Rep. Bart Stupak, D-Mich., a Catholic who was the main sponsor of an amendment keeping the status quo on abortion funding in House health reform legislation, said the calls and letters to members of Congress from Catholic leaders and pro-life organizations were very helpful in persuading 64 Democrats to support his amendment.

But Rep. Patrick Kennedy, a Catholic Democrat from Rhode Island who supports keeping abortion legal, sharply criticized the bishops for their stance, saying they were fanning “the flames of dissent and discord” by insisting that health reform not expand abortion funding beyond the current, extremely limited circumstances.

“I can’t understand for the life of me how the Catholic Church could be against the biggest social justice issue of our time, where the very dignity of the human person is being respected by the fact that we’re caring and giving health care” to the millions of people who are currently uninsured, Kennedy said in an interview with Cybercast News Service.

Bishop Thomas J. Tobin of Providence, R.I., called Kennedy’s comments “irresponsible and ignorant of the facts” and although the two planned a meeting, it had not happened as of Dec. 11.

There was widespread agreement with the often-repeated calls by the USCCB, Catholic Health Association, Catholic Charities USA and other Catholic groups for action this year to help the nation’s estimated 46.3 million uninsured.

In messages to the House, Senate and White House in May, the bishops called health care “a basic human right and a requirement to protect the life and dignity of every person.”

“All people need and should have access to comprehensive, quality health care that they can afford, and this should not depend on their stage of life, where or whether they or their parents work, how much they earn, or where they live or where they come from,” said a letter signed by Bishop William F. Murphy of Rockville Centre, N.Y., chairman of the USCCB Committee on Domestic Justice and Human Development.

From May to December, the myriad health reform proposals narrowed down to the Affordable Health Care for America Act, which passed in the House of Representatives Nov. 7 by a vote of 220-215, and the Senate’s Patient Protection and Affordable Care Act, which was expected to come up for a vote before the end of the year.

Throughout the year, Catholic leaders repeatedly insisted that the bills must exclude abortion funding and urged changes in the bills’ provisions on immigrants and affordability for low-income Americans.

“Failure to exclude abortion funding will turn allies into adversaries and require us and others to oppose this bill because it abandons both principle and precedent,” said Cardinal Francis E. George of Chicago, USCCB president, after the Senate voted Dec. 8 to table an abortion-funding amendment similar to the one passed in the House a month earlier.

Although the economic downturn made finding affordable health care even more difficult for many Americans, there were signs of hope for the nation’s children.

A study released Dec. 8 by the Kaiser Commission on Medicaid and the Uninsured found that “most states in 2009 continued to expand and simplify their Medicaid and CHIP (Children’s Health Insurance Program) programs … even as they faced the bleakest economic picture in years and severe budget pressures.”

Diane Rowland, executive director of the Kaiser commission, warned however that even with signs of an economic recovery, “fiscal shortfalls are likely to cause states to consider significant cuts to Medicaid and CHIP,” especially when economic stimulus funds to certain state programs end after 2010.

But with a reformed health care system, the picture in 2011 could be quite different.

Writing in early December in Catholic Health World, Sister Carol Keehan, a Daughter of Charity who is CHA president and CEO, said “the really hard part” of the reform process had arrived.

“This is a historic opportunity for our country, both for those with and those without insurance,” she said. “We must stay in the effort. It will take energy, commitment and good will on the part of everyone involved. Let us redouble our efforts and prayers for good health care reform now.”