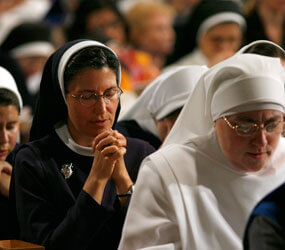 WASHINGTON – The apostolic visitation of U.S. religious communities of women continued to move forward as 2009 came to a close with plans being drawn up for visits to congregations by official representatives of the church to begin in the spring.

The visits will mark the start of the third phase of the apostolic visitation initiated by Cardinal Franc Rode, prefect of the Vatican’s Congregation for Institutes of Consecrated Life and Societies of Apostolic Life. Announced Jan. 30 at the Basilica of the National Shrine of the Immaculate Conception in Washington, the apostolic visitation process was opened “in order to look into the quality of life” of U.S. congregations of women religious.

Mother Mary Clare Millea, a Connecticut native who is superior general of the Apostles of the Sacred Heart of Jesus, is overseeing the study of 341 congregations as apostolic visitator. The study covers nearly all of the country’s 67,000 sisters. Only those nuns who live in cloisters are exempt.

A Web site, www.apostolicvisitation.org, provides basic information about the project and outlines the reasons the study is being undertaken.

Once the study concludes in mid-2011, a confidential report will be sent to Cardinal Rode, but its findings will not be made public, according to Mother Clare.

The announcement took many religious communities by surprise and was met with numerous questions about its purpose. Little information about what prompted the Vatican congregation to order the study and why the U.S. was singled out was released at the time of its announcement.

Cardinal Rode addressed the apostolic visitation’s purpose nine months after it was made public.

In a Nov. 3 statement released at the Vatican the cardinal said he requested the visitation to help American sisters and to respond to concerns for their welfare. “The apostolic visitation hopes to encourage vocations and assure a better future for women religious,” the statement said.

On Vatican Radio a day later he refuted media reports that presented the visitation “as if it were an act of mistrust of American female religious congregations or as if it were a global criticism of their work. It is not.”

In the interview he said the investigation was a response to concerns regarding “some irregularities or omissions in American religious life. Most of all, you could say, it involves a certain secular mentality that has spread in these religious families and perhaps, also a certain ‘feminist’ spirit.”

The visitation was deep into its second phase as information gathered from questionnaires sent in September to the religious communities was being tabulated. The orders had until Nov. 20 to respond, but responses continued to be received at the visitation office in Hamden, Conn., Dec. 8, Mother Clare wrote in an e-mail to Catholic News Service.

The three-part questionnaire sought information related to congregational membership, living arrangements, the ministries in which members participate, spiritual life, including the practice of prayer and the frequency of Mass attendance, and the promotion of vocations.

After concerns were raised by several congregations about information being asked for in one part of the questionnaire, Mother Clare, with the approval of Cardinal Rode, decided to drop several questions covering membership, properties the congregations owned or sponsored and financial data.

Mother Clare said the responses to the questionnaire will be used to determine which religious communities will receive visits beginning early in 2010.

“We know we cannot possibly visit all the congregations,” Mother Clare said in June as she was concluding the first round of discussions with congregational leaders. “So we want to give a representative sample to the Holy See.”

Teams of apostolic visitors were being assembled in mid-December. Mother Clare had hoped to receive up to 150 names of women religious and men religious willing to visit a cross section of congregations. Nominations of individuals to fill slots on the teams were requested last spring. Suggestions for team members were received for two weeks after the original June 17 deadline.

“Potential visitation team members, representing various congregations, ministries and areas of expertise, are still being chosen from among the many fine religious who were recommended by their major superiors, bishops, priests and sisters,” she wrote CNS in the December e-mail message.

Although some congregations sent “incomplete answers” to the questionnaire, the visits will go forward, Mother Clare said.

“The apostolic visitation office continues to receive many fine responses to the questionnaires from major superiors and is in the process of reviewing these responses,” Mother Clare wrote. “Because of the confidential nature of the visitation, the office is not at liberty to disclose the number of responses received or from whom.”

As the questionnaires were being sent to the congregations, Cardinal Rode asked the U.S. bishops to cover the cost of the visitation, estimated at $1.1 million. Mother Clare declined to say what, if any, funding has been contributed to her office. She also declined to otherwise discuss how the study is being funded.

Three months after the visitation was announced, a second unrelated study of women religious became public. The study, deemed a “doctrinal assessment,” is focused on the Leadership Conference of Women Religious and was being conducted by the Vatican Congregation for the Doctrine of the Faith, headed by U.S. Cardinal William J. Levada.

The Silver Spring, Md.-based LCWR represents 59,000 sisters, about 95 percent of all women religious in the U.S.

Bishop Leonard P. Blair of Toledo, Ohio, a member of the U.S. bishops’ Committee on Doctrine, has been charged with conducting the assessment. Bishop Blair said through a spokeswoman Dec. 10 that his work with the assessment was continuing, but would provide no other details.

LCWR representatives met with Cardinal Levada and other Vatican officials in April, but they have declined to say what was discussed.