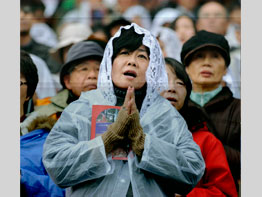 VATICAN CITY – Christian martyrdom is the fullest expression of human freedom and reflects the supreme act of love, said a top Vatican official at a Mass beatifying 188 Japanese martyrs.

“It is not the punishment or the torture that creates a martyr,” but rather the fact the person suffered and died for Christ, Cardinal Jose Saraiva Martins, former prefect of the Vatican Congregation for Saints’ Causes, said during the beatification Mass in Nagasaki, Japan, Nov. 24.

The 188 17th-century Japanese martyrs were tortured and killed in different cities between 1603 and 1639 after the Japanese government outlawed Christianity.

According to Vatican Radio, more than 30,000 people attended the ceremony in the city’s baseball stadium in the pouring rain to celebrate the beatification of Jesuit Father Peter Kibe Kasui and 187 companions.

After his Nov. 23 Angelus address to pilgrims gathered in St. Peter’s Square, Pope Benedict XVI said the martyrs’ beatification marked a significant event for the Catholic Church and all of Japan.

The pope asked people to “rejoice” and pray the beatified martyrs’ “victory in Christ over sin and death fill us all with hope and courage.”

During the Mass, which was concelebrated by 10 cardinals and bishops, Cardinal Saraiva Martins said martyrs of every age, place and time have all displayed the same dedicated faith in Jesus Christ.

Christian martyrdom “is the fullest exercise of human liberty and the supreme act of love,” he said, according to Vatican Radio.

Dying for one’s faith in Christ is “an act of love toward God and humanity, including the persecutors,” the cardinal said.

The newly beatified, all but five of whom are lay men, women, and children, had been decapitated, crucified, burned at the stake or scalded to death in boiling water. The beatified group included entire families who refused to renounce their beliefs.

By beatifying these men and women the church is underlining the importance of persevering in the belief that only God can save humankind, said Archbishop Joseph Takami of Nagasaki.

The Japanese martyrs also highlight the value of religious freedom and the necessity of facing persecution with nonviolence if there is to be peace, he said in an interview Nov. 24 with Fides, the Rome-based missionary news agency.

In an interview with Vatican Radio Nov. 20, Cardinal Saraiva Martins said because only five of the 188 newly beatified are missionary priests and the other 183 are laypeople, the church is sending a strong message to today’s young people and laity to strive to live a life of holiness.

Bishop Francis Xavier Osamu Mizobe of Takamatsu, president of the Japanese bishops’ commission that prepared the beatifications, told Vatican Radio Nov. 23 there are another 5,000 people who could have been recognized as martyrs.

He said nearly 20,000 people lost their lives in Japan because of anti-Christian persecution.

The Asian church news agency UCA News reported that today, less than 1 percent of almost 130 million Japanese are Christians, and only about 450,000 are Catholics. Buddhism and Shintoism are the main religions in the country.

Premier Taro Aso is reportedly the first Catholic to become prime minister. However, he rarely refers to his religion in public and did not attend the ceremony, UCA News reported.