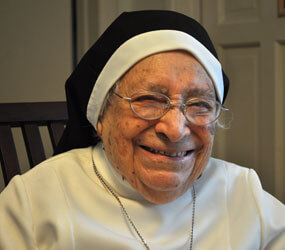 FORT LAUDERDALE, Fla. – Her deep brown eyes have seen a lot of life in 100 years.

They witnessed the wonder of the children to whom she taught the catechism of the Catholic Church in pre-Castro Cuba. They also were among the first to observe the trickle, then the storm, of children landing on U.S. soil after being smuggled out of Cuba during Operation Pedro Pan in the early 1960s.

Her eyes showed her the needs of the aging religious who were unable to care for themselves and whose own eyesight was failing. And now those brown eyes, accompanied by a smile and confident in the power of a life spent in prayer, greet her visitors.

Quiet, unimposing Sister Ana Maria Campos, now in residence at St. Jerome Church in Fort Lauderdale, turned 100 in August.
Sister Campos was born in a part of Havana called San Antonio de Los Banos Aug. 25, 1910. She knew she wanted to be a religious from an early age. But always the caregiver, she first tended to her grandmother, then cared for both her parents, and did not enter the convent until after their deaths.

Sister Campos joined the Sisters of St. Philip Neri, a congregation founded in Spain in 1858 by Marcos and Gertrudis Castaner Seda. The brother and sister, inspired by the life of St. Philip Neri, started a shelter for the poor and taught catechism.

She traces her own religious calling to her experiences as a young teacher of catechism in her hometown. She and another neighborhood friend would go out into the community, gather up the children and tell them vivid stories of the church.

“She was well known in the community both as a catechist and missionary,” said retired Miami Auxiliary Bishop Agustin A. Roman, a native of Cuba who is a longtime friend. He was a neighbor who would go on to be named a Miami auxiliary in 1979. He was the first Cuban in 200 years to be appointed a bishop in the United States.

Sister Campos joined the congregation in 1955 and began teaching at a small primary school in Cuba.

In the years before the revolution – which ended Jan. 1, 1959, with the overthrow of the Batista dictatorship – she worked at Our Lady of Lourdes in Havana. One of her former students went on to become the bishop of Matanzas. Sister Campos always loved taking care of children and working in the convent with the other sisters. She continued teaching at Our Lady of Lourdes until circumstances in Cuba led to another calling across the Straits of Florida.

In 1961, Sister Campos came to Florida, settling in Homestead where, along with other sisters, she continued to serve the Lord by caring for the children seeking freedom in America through Operation Pedro Pan, a Catholic humanitarian program that brought 14,000 unaccompanied minors from Cuba to the United States.

“We used to call her ‘Sister Cepacol’ because whenever anyone was sick, she would give us Cepacol,” recalled Sister Gomez recalled in an interview with The Florida Catholic, newspaper of the Miami Archdiocese.

Sister Campos took her perpetual vows in a tiny chapel in Homestead in 1961. The chapel was sparse, with no musical instruments, so the children borrowed an organ from another church for the ceremony.

When people ask Sister Campos what she remembers most about that time of exodus, she recalls the image of a young girl, age 11, newly arrived from Cuba, clutching her newborn brother in her arms. It was a symbol of the depth of sacrifice Cuban families made at a time of great upheaval. Sister Campos still weeps when she recalls the cries of the baby.

These days she spends her time knitting and, of course, praying. Religious music remains her great love – no surprise when you learn she used to sing and play the “bandolina,” a guitarlike stringed instrument.

“In my day I had a lovely voice,” she said with a wink.

She resides in the tidy pink convent just down the street from St. Jerome School. Sister Campos lives in an upstairs room, unable to get down the stairs because the building has no elevator. The room she sleeps in was once used by Blessed Teresa of Calcutta when she visited south Florida in 1974.

Bishop Roman visited the parish not long ago and gave Sister Campos one of his most prized possessions, his rosary.

The beads “are what I prayed with every day. She was the inspiration for my vocation and for the vocations of four other priests in our parish in Cuba. She prayed for us and for us to follow Jesus,” the bishop said.

“If I had one request it would be to be able to go back to Mass,” she said.

It has been more than two years since she was able to leave the second floor apartment to attend Mass. “My legs don’t take me anymore,” she said, “but I pray for all of you.”