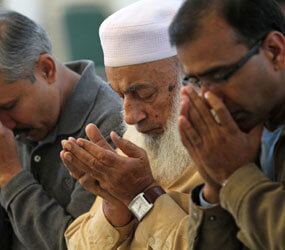 WASHINGTON – A decade after the terrorist attacks on the United States on Sept. 11, 2001, led to a backlash against Muslims, many Americans are still uncomfortable with followers of Islam and think its teachings are at odds with American values.

Slim majorities of the people polled this summer by the Public Religion Research Institute say Muslims are an important part of the U.S. religious community and that they are comfortable with Muslim women wearing burqas or Muslim men praying in public in an airport. Those majorities were less than 55 percent in each category.

The report released Sept. 6 by the Brookings Institution, which partnered with the religion institute for the study, noted similarities to how Catholics and Mormons were treated in the 19th and early 20th centuries.

“Throughout American history… immigrants professing faiths outside the existing mainstream have tested the commitment to religious liberty,” said the report, “What It Means To Be An American.”

It noted that Mormons’ endorsement of polygamy was seen as an affront to marriage and a threat to democracy, leading to members of the Church of Jesus Christ of Latter-day Saints being “hounded” to “the brink of legal extinction by the 1890s.”

Antipathy toward Catholics went deeper, the report said in an analysis of the data by Brookings fellows E.J. Dionne and William A. Galston.

“Catholicism aroused two fears,” they said, “that its theological principles were incompatible with liberal democracy and that it required transnational loyalties to a ‘foreign potentate’ (the pope) that took precedence over American citizenship.”

It took American Catholics a century to allay those fears, the pair noted. And part of that included the reinterpretation of Catholic teaching by the Second Vatican Council “to eliminate the elements least compatible with liberal democracy… the tendency toward theocracy and reservations about freedom of religion and conscience.”

The study also found a double standard for how people judge whether those who commit violence in the name of religion really represent that faith.

A large majority – 83 percent – told researchers they do not think self-identified Christians who commit violence in the name of Christianity are really Christian. But when it comes to self-proclaimed Muslims who commit acts of violence, less than half – 48 percent – say the perpetrators are not really Muslim.

“Respect for civil liberties is more entrenched than it once was,” observed Galston and Dionne, “and the large flow of immigrants since the mid-1960s has accustomed younger Americans to a more diverse society. Muslims in America have benefited from these trends.”

They noted that despite “highly publicized outbursts from some localities and candidates for political office, more than three in five Americans reject the contention that American Muslims want to establish Shariah as the law of the land.”

At a news conference where the report was released, Robert Jones, founder and CEO of Public Religion Research Institute, said there were 49 bills introduced in 2011 in 22 state legislatures aimed at heading off the introduction of Shariah-based law in local statutes or its use in courts.

Also at the news conference, Muqtedar Khan, associate professor in political science and international relations at the University of Delaware, said the figure that 47 percent of Americans disapprove of Muslims and Islam has remained constant for many years. But what has changed is that now, instead of saying they disapprove because of terrorism, more people are replying that Shariah is the reason they disapprove of the religion.

Khan said that’s especially disheartening because “it’s never going to disappear,” since “living by the Shariah is an important aspect of Muslims’ faith.” He gave the example of following the Ramadan practices of fasting, prayer and charitable giving that are laid out in Islamic law as a typical way Muslims follow the law. “Because of that we are going to have a perennial problem.”

“I sometimes wonder if those who disapprove of Shariah, if they find out murder is prohibited, will they approve,” he said. He likened the possibility of American Muslims being able to implement Shariah law in the United States to the efforts by some Christians to enact elements of Christian teachings against abortion and same-sex marriage.

After decades of trying to make those illegal and not succeeding, even with the strong majorities Christians hold in legislatures and Congress, Khan questioned how people expect Muslims to enact the whole of Shariah law in the United States when they constitute less than 2 percent of the population.

“Muslims have failed to enact the Shariah in countries where they have 100 percent Muslim population,” he said. “The point is really Shariah is just a prop to say we don’t like Islam and Muslims.”

The survey was based on 2,450 phone interviews in English and Spanish conducted in the first two weeks of August. The margin of error is plus or minus 2 percentage points for the general sample.