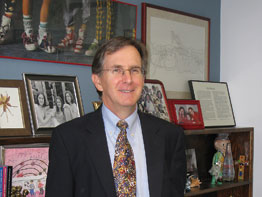 St. Agnes Hospital prides itself on instilling its values in its physicians, and Dr. Michael Burke knows them by heart.

Dr. Burke still recalls meeting with a sister of the Daughters of Charity of St. Vincent de Paul before he joined St. Agnes as chairman of the Department of Pediatrics in 1992.

“They are very explicit about which values they call their ‘core values’ – reverence, integrity, wisdom, dedication, creativity and service to the poor,” he said. “I’m proud of being part of that effort to incorporate those values in the medical care.”

Now Dr. Burke, a parishioner of St. Louis in Clarksville, has received the Seton Founders’ Award for demonstrating the qualities exemplified by the Daughters of Charity, the order that started the hospital in 1862.

The hospital’s medical executive committee votes on an award recipient each year after receiving nominations from staff physicians.

“It’s important to recognize all our associates, who continue to support the values of the hospital and Catholic health care,” said Sister Ellen LaCapria, a Daughter of Charity who is vice president for mission integration at St. Agnes.

Dr. Burke said a Daughter of Charity meets with each new physician to talk about why the order founded the hospital and to ask for support in continuing the mission.

All of them say yes, said Dr. Burke.

“Who can say no to the Daughters?” he said.

While the number of Daughters of Charity working in the hospital has declined, their values still permeate patient care.

“I think that all of us at St. Agnes try to teach residents and students how to give care with respect and compassion,” Dr. Burke said.

He also teaches medical students and residents at St. Agnes and serves as an assistant professor of medicine at The Johns Hopkins University School of Medicine.

Before coming to St. Agnes, Dr. Burke worked for six years in the Department of Pediatrics at Francis Scott Key Medical Center, now part of the Bayview campus of Johns Hopkins Hospital.

After pediatric residency training at the University of Wisconsin at Madison, Dr. Burke settled in Baltimore, where he earned a master’s in business administration at The Johns Hopkins University.

Dr. Burke lives in Columbia with his wife, Missy, and three daughters.