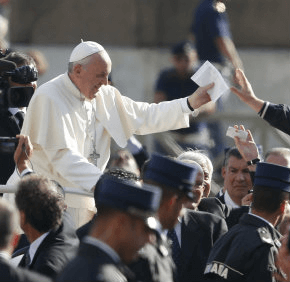 By Carol Glatz
Catholic News Service
VATICAN CITY — Pope Francis gets so much mail — about 30 large mail sacks a week — that the Vatican has set up a special office to sort through and read the overflowing stacks.
Msgr. Giuliano Gallorini of the Vatican secretariat of state is in charge of the “Papal Correspondence Office” and is assisted by a nun and two laywomen.
The sacks are brought from the Vatican post office to the “Terza Loggia” in the apostolic palace where the Vatican diplomats work. There, the papal mail team sifts through everything, sorting the letters into low-tech cardboard boxes whose tops have been torn off and labeled “Portuguese,” “Spanish,” “French” and other languages.
This video, in Italian, by the Vatican Television Center gives an insider’s look at the makeshift mail room, whose floor, understandably, is absolutely cluttered with boxes chock full of the sorted post.
Sometimes there are gifts like a handmade scarf, statuettes, drawings, but Msgr. Gallorini said most of the letters are requests for prayers and support.
“It may be the period we are living in, but many deal with people’s difficulties, especially illness. They ask for prayers for children and they detail difficult economic situations,” he said.
The correspondence team reads all the Italian mail and tries to send the letters on to the right people who can offer help. For example, requests for economic assistance are sent to the appropriate diocesan Caritas office, the monsignor said.
He said they try to do what Pope Francis would want: to listen to people with their hearts and minds, to share in their suffering and to try to find the right words in their replies (they send a reply to everyone).
What mail does make it onto the pope’s desk?
Msgr. Gallorini said, “Cases that are more delicate” or sensitive. Those items are sent on to the pope’s secretaries who make sure the pope can look at them himself and decide how they should be handled.
Pope Francis “always says that the pastor has to live with his flock, with his sheep, to feel and live their experiences with them,” the monsignor said. However, because it would be impossible for the pope to read every letter he gets, the pope asks his correspondence crew to approach their work with the same sense of solidarity and affection he would have.
For folks who wish to stuff those mail bags even more, here are the popes’ addresses. There is no email because the last time they set one up for the pope, the servers crashed.
Pope Francis
Domus Sanctae Marthae
00120 Vatican City State
and
Pope Emeritus Benedict XVI
Mater Ecclesiae monastery
00120 Vatican City State
PrevNext