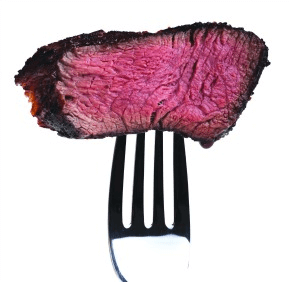 By Maria Wiering
mwiering@CatholicReview.org
Is there such a thing as a Christian diet?
It’s an idea I’ve been mulling awhile, but it seems to have taken on urgency for resolution in recent weeks. Earlier this month, I jumped on the Paleo trend, filling my plates with only meat, vegetables, fruit and fats, and no grains, sugar and beans. This, they say, is how our ancestors ate, and it’s become popular in the last several years, marketed in various forms under the names “Paleolithic,” “primal” and “ancestral.”
Frankly, with all this meat, it’s also just tasty.
I’ve also tangoed, however, with vegetarianism and veganism, both as a poor graduate student who subsisted on beans, and more recently as a Lenten exercise in solidarity with our Orthodox siblings. (For the record, I’m no stranger to the typical American diet; my husband makes sure of that.)
So, it is both strange, and yet not, for me to find myself eating Asian meatballs while reading a Christian argument for vegetarianism.
The question as to whether or not God-fearing folk should examine their forks goes back to the Old Testament and the kosher eating laws many Jews observe today. Christians do not typically avoid pork or mixing dairy and meat. However, throughout Christian history, the church has shaped the faithful’s eating through the feasts and fasts of the liturgical calendar.
While the question is not new, several books on the topic are, including “For Love of Animals: Christian Ethics, Consistent Action” (Franciscan Media, 2013) by Fordham ethics professor Charles Camosy, a Catholic and a pescatarian.
The arguments against eating meat are numerous, and include solidarity with the poor, simplicity of life, health benefits and mercy toward creation. I find the last one most compelling, and one that can be embraced both by carnivores and their plants-only friends. Vegetarians clearly do it by avoiding meat, but meat eaters do it by conscientiously choosing what meat they buy and where.
“Eating is a moral act,” advises the National Catholic Rural Life Conference. As an act of social justice, it encourages Catholics – when possible – to purchase food directly from farmers who embrace sustainable farming practices, treating their land, animals and workers in a manner befitting God’s creation. The NCRLC suggests starting with farmers’ markets or community-supported agriculture (CSA) shares. It also recommends Catholics ensure their foreign-farmed products such as chocolate and coffee are fairly traded, so producers receive a just wage and are not victims of labor trafficking.
To be sure, this is not the easiest – or cheapest – approach to food. Ever since boosting my meat consumption, I’ve watched my grocery bill rise.
Financially it’s tempting to return to the cheap meat us Americans are used to, but my conscience gets in the way. Ultimately, I see eating sustainably-produced meat, just less of it, as the right balance to strike.
Should that, too, become cost prohibitive for our family, I don’t think the answer is cheap supermarket beef. Instead, it leads to what may be the best Catholic case for vegetarianism yet: If one can’t afford to eat ethically raised and butchered meat, it might be best, then, to eat no meat at all.
Wiering is a staff writer for the Catholic Review.
To read more Amen columns, click here.
Also see:
Parish date night part of ‘intentional support’ marriages need, leaders say
St. Vincent ‘Front Door’ opens a little wider for homeless
PrevNext