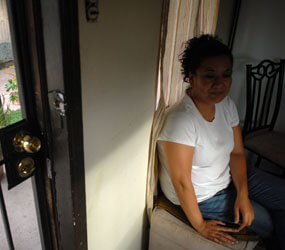 WASHINGTON – An emotional pastoral letter to immigrants from the U.S. Hispanic and Latino Catholic bishops offers love, encouragement, welcome, sympathy and assurance that “you are not alone or forgotten.”

“We recognize that every human being, authorized or not, is an image of God and therefore possesses infinite value and dignity,” begins the strongly worded letter released on the feast of Our Lady of Guadalupe, Dec. 12. “We open our arms and hearts to you, and we receive you as members of our Catholic family. As pastors, we direct these words to you from the depths of our heart.”

“We urge you not to despair,” said the letter signed by 33 bishops. “Keep faith in Jesus the migrant who continues to walk beside you. Have faith in Our Lady of Guadalupe, who constantly repeats to us the words she spoke to St. Juan Diego, ‘Am I, who am your mother, not here?’ ”

The letter thanks immigrants for “the Christian values you manifest to us with your lives – your sacrifice for the well-being of your families, your determination and perseverance, your joy of life, your profound faith and fidelity despite your insecurity and many difficulties.”

Bishop Jaime Soto of Sacramento, Calif., told Catholic News Service the bishops wanted “to reach out to the immigrant community and express our concern for them, to speak to them in a spirit of solidarity.”

Though there’s been interest in such a form of outreach for a while, Bishop Soto said there was a sense that it might especially be needed now, because from a political standpoint, it “does not look promising” for government action to improve the legal situation of millions of undocumented immigrants.

“Christian solidarity is not based on political optimism, but it is based on religious hope,” he said. The release date of the feast of Our Lady of Guadalupe was chosen because she “is such a powerful symbol of solidarity and hope, particularly in difficult times.”

The image of Our Lady of Guadalupe comes from the likeness of Mary that appeared on a cloak worn by a poor Indian to whom she appeared on a hillside in Mexico in 1531. Her coloring and features resemble those of an indigenous woman, which at the time and since then has been seen as a message of hope and solidarity to the poor.

Bishop Soto said letter was the result of a collaborative writing process among the Hispanic bishops. And they hope it will be used broadly around the country by all U.S. bishops.

In the letter, they expressed regret that some people have reacted to the economic crisis by showing disdain for immigrants. Some “even blame them for the crisis,” they said. “We will not find a solution to our problems by sowing hatred. We will find the solution by sowing a sense of solidarity among all workers and co-workers – immigrants and citizens – who live together in the United States.”

“Your suffering faces” show the “true face of Jesus Christ,” the bishops said, noting they are well aware of the great sacrifices they make for their families.

“Many of you perform the most difficult jobs and receive miserable salaries and no health insurance or social security,” they continued. “Despite your contributions to the well-being of our country, instead of receiving our thanks, you are often treated as criminals because you have violated current immigration laws.”

The bishops also acknowledged the pain suffered by families who have had someone deported or are threatened with deportation; the anxiety of waiting for legal residency status; and the frustration of young people who have grown up in the U.S., but lack the legal immigration status that would allow them to go on to college and get good jobs.

“This situation cries out to God for a worthy and humane solution,” they said.

They reiterated the position they as individuals and as members of the U.S. Conference of Catholic Bishops have taken in support of comprehensive immigration reform. Such legislation should respect family unity and provide “an orderly and reasonable process for unauthorized persons to attain citizenship.” It should include a program for worker visas that protect immigrant’s rights and that provides for their basic needs, they added.

The letter also acknowledged the difficult and dangerous path people take to come to the United States. “As pastors concerned for your welfare,” they asked them to “consider seriously whether it is advisable to undertake the journey here until after just and humane changes occur in our immigration laws.”

But, they added, “we are not going to wait until the law changes to welcome you who are already here into our churches, for as St. Paul tells us, ‘You are no longer aliens or foreign visitors; you are fellow citizens with the holy people of God and part of God’s household.’ ”

As members of the church, part of the body of Christ, “we offer you spiritual nourishment. Feel welcome to holy Mass, the Eucharist, which nourishes us with the word and the body and blood of Jesus. We offer you catechetical programs for your children and those religious education programs that our diocesan resources allow us to put at your disposal.”

Citizens and permanent residents of the U.S. “cannot forget that almost all of us, we or our ancestors, have come from other lands and together with immigrants from various nations and cultures, have formed a new nation,” they said. “Now we ought to open our hearts and arms to the recently arrived, just as Jesus asks us to do when he says, ‘I was hungry and you gave me to eat; I was thirsty and you gave me to drink; I was an alien and you took me into your house.’”

The presence of immigrants “challenges us to be more courageous in denouncing the injustices they suffer. In imitation of Jesus and the great prophets we ought to denounce the forces that oppress them and announce the good news of the Kingdom with our works of charity. Let us pray and struggle to make it possible for these brothers and sisters of ours to have the same opportunities from which we have benefitted.

“We see Jesus the pilgrim in you migrants,” they said.

The day the bishops issued their statement, a ceremony at St. Monica’s Catholic Church in Tucson, Ariz., was scheduled to kick off a rally in support of more than 60 undocumented immigrants and their families who were planning to personally petition the Immigration and Customs Enforcement agency to close their deportation cases.

In June, the Obama administration announced that ICE would shift focus away from “low priority” deportation cases and establish a way of deferring the pending deportations of people who pose no risk to the community and who have strong ties to the United States. The Tucson event is one of several staged around the country recently to draw attention to the slow pace of this new policy and the effects of deportation on families, which often consist of U.S. citizens and legal residents.