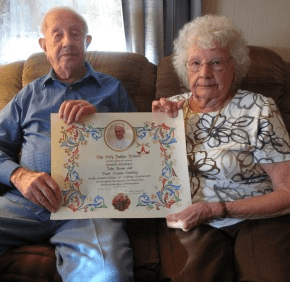 During his streetcar commute to his job at Bethlehem Steel, John Nevin Gintling would see the girl walking along the tracks on her way to Sparrows Point High School, and one day he turned to his buddy and verbalized what was in his heart.

“Every time I went by her I just had a certain feeling,” Nevin Gintling, now 98, remembered some  80 years later, as he sat next to “her” – Pearl Gintling, his wife – on the sofa of the couple’s Edgemere home.

Nevin Gintling never had to leap from the moving streetcar to find out. As his Boy Scout troop (it was normal then for an employed high school graduate to still be in the Scouts) had no meeting place of its own, it rotated through the homes of individual members. One of those members was, unbeknownst to him, brother to the girl he had seen from the streetcar.

After a couple Boy Scout meetings, Pearl Gintling remembered, “we just got to know each other, and he just asked my mother if he could take me on a date.”

Her mother’s response: “Do you realize how old she is?”

Nevin Gintling had assumed that the 5-foot-8 young woman was about 16, but she was only 13 and just starting high school.

“I guess he was a little surprised, but it didn’t matter,” Pearl Gintling, 92, remembered. “My brother vouched for him and said he was a nice guy.”

He has a habit of responding to his wife’s loquaciousness with gentle one-liners.

For the couple’s first date, they rode the streetcar downtown to the movies, likely at the Hippodrome. Their dates were infrequent at first, as Pearl Gintling’s mother had misgivings about her daughter’s young age, but the relationship developed.

“I was still a kid, you know,” she added, throwing up her arms.

Pearl Gintling converted to Catholicism, her future husband’s faith. (His sister, Sister Mary Elizabeth Gintling, founded the Salisbury-based Little Sisters of Jesus and Mary.) The couple married Nov. 21, 1942, at St. Luke, then located in Sparrows Point. Now in Edgewater, it is still their parish.

“They’re sweet people – very unassuming,” said Father Austin Murphy, the pastor. “I guess that’s how you stay together for 73 years.”

Father Murphy called the couple a “great witness” for other parishioners.

“Somebody living the sacrament (of holy matrimony) for that long, staying faithful to each other, is something beautiful to see,” he said.

Pope Francis himself recognized the couple’s fidelity on their 73rd anniversary, and they have the certificate of apostolic blessing to prove it.

“We made a promise when we got married,” Nevin Gintling joked. “The first one who left would have to take the kids.”

“That’s his story,” his wife said. “Mine is that there is a lot of give and take.”

Getting serious, Nevin Gintling concurred: “You really have to love somebody, and if you do, you don’t want to hurt them. You want to solve problems without hurting them.”

Then and now, the Gintlings, who have four daughters, put a premium on family time.

“We’ve always done a lot of things together with the children,” Pearl Gintling said.

That included station-wagon trips across the U.S.; the family has seen every state except North Dakota.

“We were avid campers,” Pearl Gintling said. “We couldn’t afford to stay in hotels.”

The couple also attributes the apparent strength of their bond to their children.

Of course, one reason the Gintlings have been married so long is because they have both lived so long. As Nevin Gintling’s father reached 100, and Pearl Gintling has a sister in her 90s, genetics must be acknowledged. Pearl Gintling also credits the sustaining power and healthy simplicity of decades of home-cooked meals: a meat, a starch and a vegetable.

Nevin Gintling shrugged: “My father used to say, ‘If I had known I would live to be 100, I would have taken better care of myself.’”

The couple has taken care of each other through the years. Nevin Gintling provided for the family as a patternmaker for Bethlehem Steel at Sparrows Point for 35 years and moonlighted as a carpenter, then went into furniture sales. Pearl Gintling, who describes her husband as “not outgoing,” wondered about the career move.

“If you know your product…” Nevin Gintling explained.

Pearl Gintling stayed at home until the couple’s daughters were in school. She began substitute teaching at a public school, and moved to the former St. Luke School in Edgemere in the early 1970s. Eventually she taught kindergarten full time, taking 30 students in the morning and 30 in the afternoon.

“I did not have any help; there were no aides,” she said.

A strong-willed woman, she made a local name for herself as one of the leaders in a struggle involving independent truckers who obtained work from Bethlehem Steel but set up shop in various unauthorized places in the neighborhood when not on the road.

“We weren’t fighting truckers,” Pearl Gintling insisted. “We wanted to get them a location and established facility.”

Whoever she fought was a fierce opponent. She received threats on her life, she said, and added that she still has a threatening letter naming the Gintling’s four daughters. She said that acid was thrown on her car and roofing nails were dumped all over the couple’s driveway.

Bribes were also offered. Pearl Gintling said that before one hearing, a man offered her $10,000 to drop the whole thing.

State laws regulating trucking were eventually passed; the threats were for naught.

“There’s something in me that says, ‘You’re the bad guys; you’re not supposed to win,’” Pearl Gintling explained. “I just think what’s right is right and what’s wrong is wrong.”

The Gintlings lay fairly low nowadays, though they still attend family functions; Pearl Gintling still drives. They go to monthly dinners at the Bethlehem Council of the Knights of Columbus hall on Bay Front Rd. in Edgemere.

A lifetime Knight and two-time Grand Knight of the council, Nevin Gintling added, with his brothers, an updated kitchen, bathroom, bayside dock and pavilion at the hall, which was once a house.

Signs of the couple’s devotion are subtle. Throughout their home are semi-abstract sculptures of the Blessed Virgin Mary, the infant Jesus and sometimes the whole Holy Family, in marble, wood and other materials, presumably obtained through travel or collected.

“Did you notice those sculptures?” Pearl Gintling asked as the couple’s interview with the Catholic Review wound to a close.

“I made those,” she revealed.