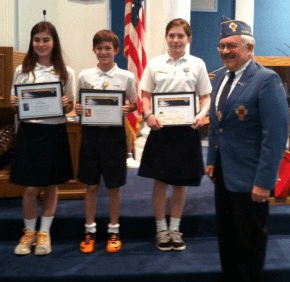 By Catholic Review Staff
When students in Meghan O’Leary’s seventh-grade social studies class at St. Mark School in Catonsville entered the Catholic War Veterans Essay Contest, each came up with his or her own version of “What America Means to Me.”
Three students from St. Mark’s earned awards in the contest, which was sponsored by the Charles Carroll Post of the Catholic War Veterans of America.
Mary Beall placed first on the national level, Clara Langan won first place on the state level and Aidan Dunworth won third place on the state level.
Certificates and cash awards were distributed to the students at an assembly May 16.
Below is Mary Beall’s winning essay.
What America Means to Me
By Mary Beall
America means many things to many people, such as freedom and unity. America gives many people the opportunity to be the best they can be, and be educated in the best way possible. America is also open to people of other nations looking for a brighter future. Today, many people are making promising lives for themselves, which most likely would not be true if not for our relatives and ancestors who have gone before us in the hope of granting us our freedom.
The freedoms America gives its people are more abundant than any other nation.  These freedoms include freedom of religion and speech. Another right that is given to the citizens of America is being able to vote for who you want to be elected into government, once you reach the age of eighteen. We also have the privilege to speak what we feel, without being judged. America also means sacrifice to me, because of the people who fought for our freedom in the seventeen hundreds, to the people serving in the military today.
These people risk their lives every day to give back to their nation, the bright future it has allowed them to have. Americans are accepting of people who have a different race, color, or religion, and welcome them into their country, as long as they follow the necessary legal requirements, unlike other countries that persecute others just because they are different.
There are many monuments dedicated to people and symbols throughout America, which show our citizens’ pride and gratitude. These monuments include the Statue of Liberty, which welcomed immigrants into our country, the Lincoln Memorial, which is dedicated to Abraham Lincoln, who made this nation a more united and free place, and many others.
America is a wonderful place to live. I hope many more people have the opportunity to live in such a wonderful, free nation as I do. I hope America continues to grant its people the respect and freedom they deserve.
Also see:
Carrying physical and emotional baggage, U.S. Military visits Lourdes
John Carroll alum among U.S. Naval Academy graduates
PrevNext