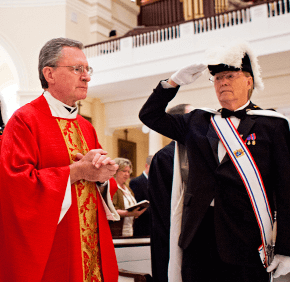 Monsignor James P. Farmer received the “Man for All Seasons Award
By George P. Matysek Jr.
gmatysek@CatholicReview.org
The first person Monsignor James P. Farmer defended when he served in the U.S. Army Judge Advocate General’s Corps in the early 1970s was a man from Puerto Rico who spoke no English.
The future priest, then a young lawyer who knew no Spanish, received the case on appeal after his new client had already been convicted. The Puerto Rican had been previously represented by another man who also wasn’t bilingual.
Remembering that a criminal law professor at The Catholic University of America Columbus School of Law had once told him that lawyers have a right not to defend someone, but no right to defend someone poorly, Monsignor Farmer informed his commander he couldn’t defend a man with whom he couldn’t communicate.
The commander balked, igniting a bold response from the future priest.
“I said, ‘Sir, either you get him a lawyer who speaks Spanish, or I’ll call the Secretary of the Army and report you right now,’” Monsignor Farmer remembered telling his superior.
“Hold on there, Farmer,” the commander barked. “Not so fast there.”
Monsignor Farmer recounted the episode after receiving the “Man for All Seasons Award” Oct. 27 at the Catholic Center in Baltimore. The award is presented by the St. Thomas More Society to those who embody the examples and principles demonstrated by St. Thomas More, an English saint who was martyred rather than violate his conscience.
To view a slideshow from the event, navigate the arrows below.
Interested in a purchasing a photo from the event? Click here.
The award ceremony followed the annual Red Mass, celebrated by Archbishop William E. Lori at the Basilica of the National Shrine of the Assumption of the Blessed Virgin Mary. The Mass marked the opening of the judicial year and was attended by area judges, attorneys and legal professionals.
Monsignor Farmer, pastor of St. John in Westminster, is a graduate of Archbishop Curley High School and what is now Loyola University Maryland, both in Baltimore. After earning his law degree in 1972, he served in the Army as a captain before becoming a public defender for five years. He studied for the priesthood at Mount St. Mary’s Seminary in Emmitsburg and was ordained in 1979.
Michael May, a former president of the St. Thomas More Society who has known Monsignor Farmer for 48 years, described his friend as someone who has always had an innate ability to see the good in everyone and an “extraordinary empathy for anyone he ever met.”
May recalled working on a bitter divorce case in which the former husband of his client began to attack him personally, extending those attacks to May’s family. He sought Monsignor Farmer’s advice, which was to pray for the man who persecuted him.
“He was right,” May said. “We need to hear that sort of thing. And he’s got the guts to tell me.”
Archbishop Lori, Monsignor Farmer’s seminary classmate, highlighted the priest’s pro-life advocacy. Monsignor Farmer helped open the first pregnancy resource center in Baltimore, served as chaplain to pregnancy centers in Maryland for 33 years and was the first archdiocesan respect life director. He recently helped establish a pregnancy center in Westminster and often uses his legal background to argue against existing abortion laws.
Judge Mary Reese, a former St. Thomas More Society president, said Monsignor Farmer helps expectant mothers “choose life over the death of their babies.”
May noted that Monsignor Farmer’s respect for life is all-encompassing. The priest showed courage in opposing the death penalty and supporting marriage and family, May said. Monsignor Farmer was also a source of renewal when he served as pastor of St. Thomas Aquinas in Hampden, May added.
“Poverty threatened to crush the neighborhood,” said May, a former police officer. “He refused to let that happen. He embraced the addict, the homeless, the poor, the prostitute, the very least of our brethren.”
Monsignor Farmer, chaplain of the St. Thomas More Society and a former pastor of St. Ursula in Parkville, thanked members for their support. He noted making hundreds of calls to help him provide legal assistance to the poor or help someone get out of jail.
“Never once has anyone said no,” he said. “Your commitment to helping people is extraordinary.”
Also see:
All Saints Day is a holy day of obligation
Playing God: Changing genders? The ethics of sex reassignments
PrevNext