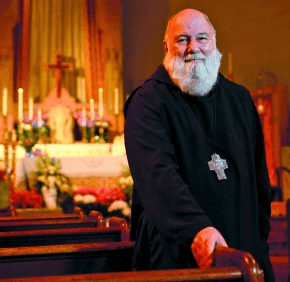 Soon after his July 1984 arrival at St. Benedict Parish, Benedictine Father Paschal Morlino earned the nickname “The White Tornado” for the way he whirled around in his summer habit on the campus of the West Baltimore parish, tackling one pressing problem after another.

It beat his previous moniker, “The White Devil,” bestowed upon him by the nuns he had worked with in the Holy Land in the 1960s and 70s.

To the prostitutes loitering on the steps of St. Benedict, he was likely “the crazy bearded guy with the garden hose,” a notoriety he earned only after his three polite requests for them to move down the street were ignored.

It’s all good. Father Morlino, who is celebrating the 50th jubilee of his ordination this year, now chats up the women and reminisces with the nuns. Parishioners hold him in high enough esteem that 12 volunteers help him run the place, answering the parish phone with human voices and handling all that would fall to a paid staff in other places.

“He has lived a clearly sacrificial life, and that has led other people to step forward,” said parishioner Tom Basil, who first chronicled the garden hose incident in a piece for the New Oxford Review.

Basil met Father Morlino in 2001, when he “came down and preached a mission in the suburbs.”

“I was struck by him and asked if he did spiritual direction,” Basil said. “He looked me up and down and said, ‘Well, I’ll consider you.’”

The insights he would receive, Basil said, could be distilled down to “You go with the unexpected and face it – Jesus, I trust in you.”

It’s preaching that the 78-year-old Father Morlino, a monk of Saint Vincent Archabbey in Latrobe, Pa., clearly practices himself. Upon his arrival at St. Benedict three decades ago, his abbot asked him what he thought.

“It needs a big bomb,” he replied, a typical response from the man whose fellow monks refer to him, sarcastically, as “cryptic.”

The church was in disrepair and attendance was quite low. Father Morlino rolled up his sleeves and got on his knees.

“After the first six months I was ready,” he continued. “Like my father said, if you get lemons, make lemonade. We have a lot of lemons around here.”

Father Morlino grew up fishing and crabbing in Portsmouth, Va., later helping his father and mother run their fishing pier and campground. His parents, now deceased, returned the favor when he arrived in Baltimore.

“They were fireballs. They would come and help me do all kinds of stuff,” he said, pointing out the hymnal racks in the pews that his father had fashioned.

The elder Morlino had hoped that his son would become a doctor. At any rate, the boy was not an obvious candidate for religious life, pious examples of his family notwithstanding.

“I am sick and tired of all my saintly relatives being ‘canonized’ all the time,” he would tell the Daughters of Charity sisters who educated him at the former St. Paul’s School in Portsmouth, Va. “I’m not one of them.”

While Father Morlino was in the pre-med program at Belmont Abbey College, a Benedictine institution in Charlotte, N.C., one of the monks convinced him to become a “doctor of souls” instead.

It is a role he fulfills to this day, offering morning and evening prayer in the Benedictine tradition, as well as weekly eucharistic adoration.

His Good Friday processions through the West Baltimore streets bring people out to pray on their stoops.

“A lot of us (parishioners) don’t actually live here, but he encourages us to bring God to the neighborhood,” said Leah Paslick, who administers St. Benedict’s religious education program and helps with the church food pantry.

Temporally, Father Morlino pulls more than his weight as well. His Christmas outreach brings hundreds to the church to receive gifts for their families. He rents out several nearby rowhomes that he has been willed at lower than reasonable rates, serves on the boards of nine community associations, and hosts a monthly meeting between residents and police, and is working, with the Benedictines, on converting the entire block behind the parish into senior housing.

He’s done that sort of thing all his life. In 1971, he founded Adelphoi in Latrobe, Pa., as a home for troubled boys. Today, according to adelphoi.org, the organization serves over 950 boys and girls, and their families, every day.

“Things have happened to me,” Father Morlino said. “God has always worked well in my life.”

St. Benedict Parish will celebrate his 50th jubilee with an 11 a.m. Mass of thanksgiving on May 15.

Playful pooch an integral part of life at St. Benedict