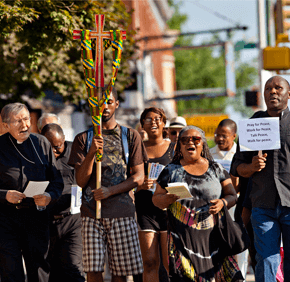 By Elizabeth Lowe
elowe@CatholicReview.org
Twitter: @ReviewLowe
A group of about 50 Baltimore residents braved sweltering heat July 15 to walk through West Baltimore asking God to bring peace to the city.
“I don’t know if it (the prayer walk) is that effective but it shows concern,” said Missionaries of St. Paul of Nigeria Father Augustine Inwang, pastor of Transfiguration Catholic Community in West Baltimore. “Instead of sitting down and talking about it we’re doing something.
“We hope it will spark other dialogue. We hope people will ask ‘why are you doing this?’ It’s better for us to do something rather than do nothing.”
To view a slideshow, navigate the arrows below.
Interested in purchasing a photo? Click here.
Father Inwang was among the clergy who joined several dozen Catholics and Baltimore residents as they journeyed on the 45-minute prayer walk that began and ended at St. Edward in West Baltimore in response to recent violence in the city.
Several members of the group carried signs with messages about peace and sang church hymns in a strong unified voice. They paused at four locations tarnished by violence, read Scripture verses and prayed.
“It shows that people of goodwill can go into an area and make a difference,” said Baltimore Auxiliary Bishop Denis J. Madden, who helped lead the walk.
The prayer walk came after a June in which there were 28 homicides in the city. The majority were shootings, according to multiple news sources. As of press time July 16, there had been 10 homicides in the city in July. Again, the majority were shootings.
The group had a police escort to ensure its safety.
The walk followed a similar effort in which hundreds of men participated in a 10-mile march along North Avenue earlier this month to protest the recent uptick in gun violence and two days after the not guilty verdict in the highly-charged Trayvon Martin-George Zimmerman case in Florida.
“We meet the people where they are,” said Deacon Wardell Paul Barksdale of St. Bernardine Parish in Baltimore. “They need jobs, they need protection, they need to feel safe in the house they live in. It shows we’re not afraid to walk.”
“I think it (the walk) will bring people closer together, make them more aware of their surroundings,” said Stephanie Jackson-Matthews, a parishioner of the Basilica of the National Shrine of the Assumption of the Blessed Virgin Mary in Baltimore. “We just pray for our young people.”
“It (the walk) will help because it will give people a chance to see young males, black or white, are not all violent. You can’t stereotype,” said Damont Brown, 17, a West Baltimore resident and parishioner of Sacred Heart of Jesus – Sagrado Corazón de Jesús in Highlandtown. “It will open up people’s eyes and show them that not all young males are bad.”
View a video from the October 2012 Prayer Walk with Bishop Madden.
The next prayer walk is scheduled for Aug. 29, Bishop Madden said. A location hasn’t yet been selected.
PrevNext