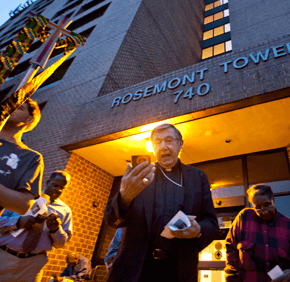 As the sun set and a half-moon shined bright Oct. 22, more than 20 people walked through the streets of West Baltimore singing and praying for peace.

“Prayer is an important kind of energy to bring into the community,” said Josephite Father Ray P. Bomberger, pastor of St. Peter Claver and St. Pius V, both in West Baltimore. “It makes people stop and pause. There is so much violent energy and fear.”

Father Bomberger was one of a handful of clergy members among Catholics and West Baltimore residents who went on a prayer walk that began and ended at St. Edward in West Baltimore.

During the nearly hour-long walk the group paused at five locations marred by violence and prayed for peace to come to the neighborhood. Dozens of prayer cards were distributed throughout the night to anyone who would accept them.

Baltimore Auxiliary Bishop Denis J. Madden, who helped lead the walk, said the walks began a couple of years ago.

“The idea is to be a presence,” Bishop Madden said. “We want them (the community) to know they’re in our thoughts and prayers.”

Congregation of the Holy Spirit Father Evod E. Shao, pastor of St. Edward, said “there is so much unrest, so much fear.”

“Violence begets violence,” said Father Shao, who blessed the stops with holy water. “That’s why we are praying for peace. I believe in prayer. If you pray, we don’t know how God works and you don’t know who you will touch.”

At each stop, a Scripture verse was read and the faithful said the prayer of St. Francis.

The group traversed over broken glass, trash and past curious onlookers. Two Baltimore police officers trailed the group to ensure safety and order.

Theron Black, a parishioner of St. Edward and president of the Winchester Improvement Association, participated “to show the public that we need prayer.”

“A little prayer goes a long way,” Black said. “A lot of people in our neighborhood are scared because of the crime, the drugs. There are people in the community who really do care.”

Mable Gordon, president of Citizens For Community Improvement and a West Baltimore resident, took part in the walk “because we do need prayer and we need to stop the violence.”

“Prayer is what’s going to make the changes,” Gordon said. “(The walk) let the people know there are decent people who still live in the neighborhood and they want to stop the violence. Prayer changes things.”

Missionaries of St. Paul of Nigeria Father Augustine Inwang, pastor of Transfiguration Catholic Community in West Baltimore who walked with the group, said “it is our own responsibility and obligation to be here.”

“You never know who will pray,” Father Inwang said.

The next prayer walk is scheduled for Nov. 29, Bishop Madden said. A location has not yet been selected.