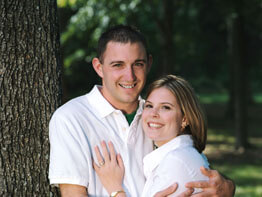 When St. Margaret, Bel Air, parishioners Danielle Giannone and Jonathan “Rocky” Phillips were choosing a wedding date, they wanted the numbers to complement the day of their first rendezvous – which was 02/02/02.

Though engaged in early 2006, the admittedly superstitious 20somethings promptly ruled out 06/06/06 as the day that would forever be associated with their nuptials.

Instead, they settled on the next possible date with three matching numbers – 07/07/07.

“Yes, I am superstitious, but I didn’t choose the date for the lucky sevens,” said Ms. Giannone, 25, of Bel Air. “But, it’s a cool date. It falls on a Saturday and after doing a little research, I’ve found so many other links to the number seven and our wedding.”
For instance, her soon-to-be husband was her seventh boyfriend, her wedding dress has two rows of seven hooks in the bustles, she has seven bridesmaids, and her wedding band is adorned with seven diamonds.

Another link to the number seven is how many parental figures will attend the ceremony, which include Ms. Giannone’s father, mother and step-father, and Mr. Phillips’ mother, step-father, father and step mother.

Time magazine has listed July 7, 2007 as the trendiest day of the year for couples to exchange wedding vows and suspect it may eventually be listed as the most popular in history, with romantic duos hoping the triple-seven date will make them lucky in love.
Nearly 31,000 of the theknot.com’s betrothed couples chose 07/07/07 to get hitched, Desperate Housewives actress Eva Longoria is reportedly marrying San Antonio Spurs’ star Tony Parker on that date and churches across the Archdiocese of Baltimore have been booked for weddings on the first Saturday in July.

“We’ve received multiple requests for weddings on that date, all the way back to last year,” said Monsignor Joseph L. Luca, pastor of St. Louis, Clarksville.

So inundated with wedding ceremony requests for 07/07/07, the Chapel of the Flowers in Las Vegas stopped booking for that date last March, something it has never had to do in the past.

“As soon as I realized this was going to be considered a lucky day to get married, I knew I would have to get my wedding stuff booked early if I wanted to get married on that date,” said Ms. Giannone, a detail-oriented taskmaster. “I booked the reception hall and disc jockey in February 2006,” two months before Mr. Phillips, 24, of Perry Hall officially proposed.

“One of the first things Danielle and Rocky told me during our first meeting (in April 2006), was how difficult it was to make reservations on that date,” said Father Martin Burnham, associate pastor of St. Margaret, the priest who will preside over the marriage ceremony. “I’ve heard others say that too. People are so funny about dates.”

Though the Catholic Church doesn’t subscribe to superstition or numerology, the number seven does appear in many references in the Scriptures, including seven gifts of the Holy Spirit and the seven sacraments, said Monsignor Robert J. Jaskot, chancellor of the Archdiocese of Baltimore.

“All of the early Christians were Jews,” Father Jaskot said. “The number seven represented fullness to the Israelites and the fullness is God.”

Even though they have secured what many believe is the luckiest day of the 21st Century to marry, the soon-to-be Mr. and Mrs. Phillips are being careful not to jinx their matrimonial bliss.

“We won’t walk under an open ladder and Rocky always walks out of the path of black cats,” Ms. Giannone said with a chuckle. “And, we’re throwing tons of salt over our shoulders.”