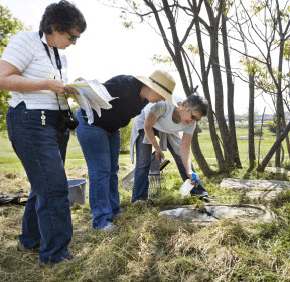 Descendants of those buried in a cemetery in Baltimore’s Clifton Park are working to clean up its unmarked, overgrown and neglected grounds.

Stephanie Town, chairwoman of Friends of St. Vincent Cemetery, a nonprofit organization working to clean up the cemetery of St. Vincent de Paul Parish, Baltimore, and build an online database with the names of those buried in the cemetery, organized a community cleanup April 21 in an effort to “return dignity to the burial ground.”

“This is our museum to the past,” said Town, 68, of Landenberg, Pa., who has relatives buried in the cemetery.

“The way it’s been neglected is very inappropriate,” Town said.

In the weeks before the cleanup, local inmates spent hours removing some of the waist-high weeds that fill the five-acre cemetery so volunteers could weed around headstones, move debris that could damage a lawnmower or weedwacker and rake cut grass, Town said.

“Right now we’re on a springboard and we’re struggling to get started,” Town said. “(But) I think we’re onto something.”

The last burial there was in 1955. An online database has about 3,000 burial records – and is growing, Town said.

The cemetery, which opened in 1841, is landlocked by Clifton Park Golf Course and less than three miles from the church, said Father Richard T. Lawrence, pastor of St. Vincent de Paul.

After arriving at the parish in 1973, Father Lawrence said he received phone calls “every few months” and had to go to the cemetery to rebury a body, disturbed by what he said were Irish gang members as part of the gang’s initiation.

“We could not maintain or secure it,” Father Lawrence said.

Later that decade, the mausoleum was destroyed and the tombstones were gathered in piles, Father Lawrence said. No graves were disturbed.

There are four piles of about 100 headstones in the cemetery, Town said.

“The church did not have the means or wherewithal to control the vandalism,” said Town, a parishioner of a Catholic church in Delaware. “The city did not have the resources to have around-the-clock police protection.”

Town, who got involved in 2010 with what is now the nonprofit, wants to establish a perpetual care fund to maintain the cemetery and create a memorial monument to honor the dead. She does not know how much the monument and routine maintenance would cost.

She wants the cemetery to be “manageable” in the hopes of attracting volunteers, donations and grants.

Town has gotten support from the city’s department of recreation and parks and the Baltimore Municipal Golf Corporation, which she hopes will help with the cemetery’s cleanup and continuous care.

“The cemetery has not been high on the priority list, but its been high on (Town’s) priority list,” said Father Lawrence, who said the parish matches the amount of money the nonprofit raises for the cleanup. “It’s not something I would have otherwise gotten to.”

“We have to have people see the value of maintaining the property so the dignity of those buried there is maintained,” Perry said.