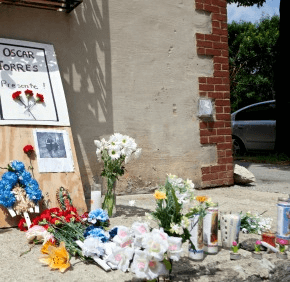 By Maria Wiering
mwiering@CatholicReview.org
UPDATED 4 p.m. June 2, 2014 -A memorial of candles, fresh daisies and a statue of Our Lady of Guadalupe clustered around a black-and-white photo of 16-year-old Oscar Torres, who was shot and killed on the spot May 26.
Days later, his blood still stained the ground.
The memorial was steps away from Viva House, a Catholic Worker House and soup kitchen. Its founders, Brendan Walsh and Willa Bickham, didn’t know Torres or his family, but have reached out to his parents and brother who live nearby.
Viva House also made a donation to his parents to help them transport his body to his native Mexico, where they would like him to be buried. Other donations are being solicited under “Funeral Expenses for Oscar Torres” at gofundme.com with a goal of $2,500.
The donation will help bury the dead, a corporal work of mercy, and a foundational tenet for the Catholic Worker movement.
Walsh and Bickham, both 71, who started Viva House a year after their marriage 47 years ago, also visited the Torres family and held a vigil with neighbors before their soup kitchen’s noon meal May 28. The Torres family held another vigil that evening.
The most moving moment, Bickham said, was when Francisco Torres, Oscar’s father, poured water on the blood stain, trying to wash it away.
Bickham said the family, who is Catholic, has a shrine in their living room with photos of their son as a baby and teenager, with candles and rosaries. Torres was an aspiring artist who had dropped out of Patterson High School so he could work to help his family, according to multiple reports.
He was killed in the early morning, and the suspect stole the car in which he was riding. Another victim was also shot, but his name and condition have not been made public. The perpetrator had yet to be found May 30, but is suspected in causing a car crash – with the stolen car – in East Baltimore May 27 that killed 12-year-old Shanizya Taft.
Next to Viva House and Torres’ memorial is “a stone of hope” which Catholic Workers put up in the mid-1990s, when Baltimore City’s annual murders rose above 300. It quotes Dr. Martin Luther King Jr.: “We will hew out of the mountain of despair a stone of hope” and includes words of hope for “an end to all violence.”
Like other Catholic Worker Houses, Viva House resists “the works of war” and promotes peace.
Given the poverty, drugs and unemployment in West Baltimore, that peace can be elusive. From the site of the stone of hope, Walsh can point to three other places young men were murdered near their property.
Bickham, an artist, said she once made a banner for St. Peter Claver, Baltimore, that read: “The sting of death is everywhere; Christ, where is your victory?”
She added: “That’s how you feel. It’s like the grief can just go in waves.”
Torres’ wake will be held at St. Patrick in Fells Point June 5 from 7-9 p.m, followed by a 9 p.m. funeral Mass. St. Patrick is a mission of Sacred Heart of Jesus – Sagrado Corazón de Jesús in Highlandtown.
Its pastor, Redemptorist Father Robert Wojtek, said violence like Torres’ murder affects the parish every four to five months. He joined with religious and community leaders June 2 at CASA de Maryland in East Baltimore to decry violence in the city, especially between blacks and Latinos.
He said Torres’ death was one of the reasons he attended the event, where he offered a closing prayer.
“We’re talking about young people, the future of our society and the future of our city,” he said. “If there’s already so much violence now, what kind of future will we have? … Our hope in God and the fact that we work together, the unity makes us stronger.”
He said the parish is supporting the Torres family spiritually. Redemptorist Father Uriel Useda, an associate pastor of Sacred Heart, attended another vigil for Torres May 30. Father Wojtek was on vacation the week of the shooting.
Sacred Heart does not usually help with costs associated with sending the deceased’s body to Mexico for burial, he said. It’s a common request, he said, but the high expense prohibits the parish from contributing to every family, he said.

The Mexican consulate, however, is handling the arrangements to send the body back to Mexico, he said.