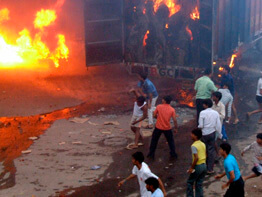 AGRA, India – The Agra Archdiocese temporarily closed all its schools and colleges after violence erupted in the city that is home to the Taj Mahal.

Police imposed a curfew Aug. 29 after one person was killed and several were injured in demonstrations reacting to the deaths of four Muslim youths. Television footage showed a deserted city and smoke billowing from vehicles in some areas.

The archdiocese closed its schools and colleges in the area as a precaution, Father Miranda said, and planned to reopen them Sept. 1.

Violence broke out in the early morning of Aug. 29, after a speeding truck mowed down and killed four Muslim youths who were returning home after a religious procession. The previous night was observed as a night for forgiveness or atonement, a time when Muslims pray for the dead.

After the incident, thousands of people surrounded the area. They burned trucks “which were lined up on the highway,” Father Miranda said. “One shoe factory and a petrol pump were also burned.”

Authorities closed the Taj Mahal, a mausoleum recently voted one of the seven new wonders of the world that attracts an average of 20,000 people daily, and the curfew reportedly stranded some 700 tourists in the city. The state government issued an advisory asking tourists to stay in their hotels until peace was restored in the city.

Agra has experienced troubled Hindu-Muslim relations. Once the 17th-century center of Muslim rule in India, the city now has a Hindu majority, but Muslims still predominate in some areas.

He said Indians “need to change our mindset (and) address issues more objectively and rationally.” Instead of engaging in violence as a means of protest, people should think of helping those in difficulty, he said.

“Clashes like this never resolve problems,” Father Joseph said, “but create more hardship for the people, whichever community they belong to.”

Some media reports said the police were inactive during the Agra violence.

However, Father Miranda said, “No one can be blamed here.”