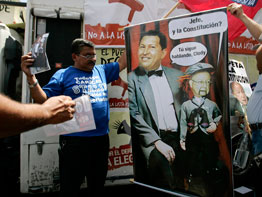 CARACAS, Venezuela – A reformist church which has adopted many Roman Catholic symbols and rituals while departing from several traditional church teachings has come under fire from Venezuelan Catholic leaders.

Archbishop Roberto Luckert Leon of Coro, vice president of the Venezuelan bishops’ conference, told the Caracas-based Union Radio June 26 that the Reform Catholic Venezuelan Church is attempting to show that the Catholic Church is divided.

He accused the government of Venezuelan President Hugo Chavez of bankrolling the new church in an attempt to divide the Catholic Church and warned that liturgies celebrated by the church had no religious validity.

The new church’s bishops “are going to dress like priests and carry out baptisms and confirmations, all paid for by the government which has tried to finish off the Catholic Church but failed,” Archbishop Luckert said.

The church was founded by a group that includes several Venezuelan Catholic priests and members of the Anglican and Lutheran churches from several nations, Peru, Mexico and Canada among them. The reformist church echoes phrases commonly used by President Chavez, who says his government is a “revolution for the poor.”

In a statement announcing the church’s founding, the group said that they would emphasize “social responsibility” and have a “strong Bolivarian spirit which recognizes that Jesus Christ, as a man of history, is present in this revolution.”

Cardinal Jorge Urosa Savino of Caracas said the reformist church “can’t be considered a church … since these priests who have participated in the creation of this new association certainly are schismatic and, as such, are excommunicated.”

Venezuelan Catholic Church leaders have been among the harshest critics of the policies of President Chavez, who was first elected in 1998 and has promised to transform the oil-rich nation into a socialist state. Church officials have accused the Chavez government of violating civil rights, permitting an explosion of crime and weakening democracy. President Chavez, in turn, has accused the church leadership of elitism.

A leader of the new church said that it shared all the values of the Roman Catholic Church, “except for (adding) a commitment to the poor.”

Venezuelan Catholic leaders say the Catholic Church provides a great deal of help to the nation’s poor, including a large network of parochial elementary and high schools.

Catholic Church leaders and other President Chavez critics say that the Venezuelan president has done little for poor people besides distributing allowances from the nation’s oil riches, which they say increases their dependency on the government.

Archbishop Luckert also told Union Radio that one of the new church’s priests had lived with a woman and that another recently had gotten married. He said the men had been “excommunicated” and called them “delinquents.”

Reform Catholic churches also exist in other nations, including Costa Rica, where it permits its members to divorce and remarry and does not require priests to be celibate.