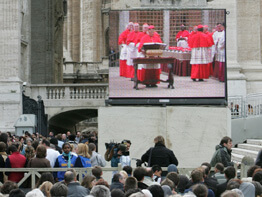 VATICAN CITY – Keeping in step with the fast pace of communications technology, the Vatican television center is to begin broadcasting in high definition.

The first papal event to be aired using the new format will be a special April 15 Mass celebrating Pope Benedict XVI’s April 16 birthday.

“We’ve realized that if we want to continue to do a good job of broadcasting footage of the pope to other television stations, we have to be ready for the day” when high definition is expected to become the norm in television broadcasting, said Jesuit Father Federico Lombardi, the Vatican spokesman and head of the Vatican television center, or CTV.

CTV, which is in charge of producing, broadcasting and archiving filmed Vatican and papal events, must keep up with new technology, said Father Lombardi. If they don’t keep up, “people won’t be able to see the pope anymore” on their television screens, he said.

After April 15, the center gradually will start to broadcast regular Vatican events in high definition, while the major events will be aired using the new technology.

High-definition television, or HDTV, is a digital broadcasting system for television that offers greater resolution and a sharper image than found in traditional formats.

Father Lombardi said the capability would allow CTV to provide papal event coverage to the many high-definition television broadcasters around the world that are hungry for programming.