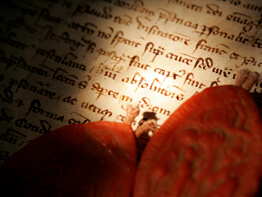 VATICAN CITY – The Vatican is publishing a collector’s edition of documents on the Knights Templar, the medieval crusading order that became the focus of legends and mysteries.

The book, published by the Vatican Secret Archives, will reproduce original parchment texts preserved in the Vatican, including a large folio discovered six years ago that details a papal investigation of the order.

Titled “Processus Contra Templarios” (“The Trial Against the Templars”), the elaborate volume will cost around $8,400. Only 799 copies will be put on sale, according to the Scrinium publishing house, which publishes Vatican Archives’ material. An 800th copy will be presented to Pope Benedict XVI Oct. 25 by a panel of Vatican officials, church historians and researchers.

According to Scrinium, the volume contains the complete acts of the original hearing against the Templar order.

The Knights Templar were founded in Jerusalem in 1118 and during the Crusades grew in influence and power.

In the early 1300s, after an investigation ordered by Pope Clement V, the knights were charged with heresy and their assets seized. The pope eventually dissolved the order, and many members were burned at the stake.

The centerpiece of the new volume is a large document discovered in 2001 by a Vatican Archives’ researcher. Called the “Parchment of Chinon,” it is a report on the early phase of Pope Clement’s investigation, when the pope had apparently absolved the knights of heretical charges and hoped to resolve their situation by reforming the order.

Through the centuries, the story of the Knights Templar has been connected with the legend of the Holy Grail, the cup said to have been used by Jesus at the Last Supper and which was believed to hold miraculous powers.

Some believed the Knights Templar had discovered the grail and were holding it in Jerusalem – a legend that was elaborated upon in the popular novel “The Da Vinci Code.”