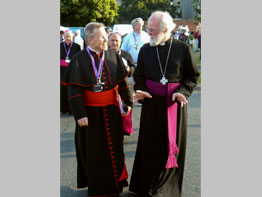 VATICAN CITY – The Anglican Communion needs to find a way to affirm the dignity of all people and encourage the active role of women in the church while remaining faithful to the Christian tradition and Scriptures, said Cardinal Walter Kasper.

The cardinal, president of the Pontifical Council for Promoting Christian Unity, spoke July 30 at a session for bishops attending the Anglican Communion’s Lambeth Conference, which is held once every 10 years, in England.

Offering “Roman Catholic Reflections on the Anglican Communion,” the cardinal told the bishops he spoke “as a friend” representing a church committed to dialogue with Anglicans and praying that the Anglican Communion does not split as a result of differences over ordaining women and over homosexuality.

The ordination of women bishops, the blessing of same-sex unions and the ordination of an openly gay bishop in some Anglican provinces are seen as practices that will make Roman Catholic-Anglican unity impossible, in addition to straining relations among Anglicans.

The text of his presentation was published in the Vatican newspaper, L’Osservatore Romano.

In his address, the cardinal said, “We hope that we will not be drawn apart, and that we will be able to remain in serious dialogue in search of full unity so that the world may believe.”

Cardinal Kasper told the bishops, “It is a strength of Anglicanism that even in the midst of difficult circumstances, you have sought the views and perspectives of your ecumenical partners, even when you have not always particularly rejoiced in what we have said.”

He said even as the Roman Catholic Church prays that Anglicans will find ways to strengthen their communion the bishops must remember that what is at stake “is nothing other than our faithfulness to Christ himself.”

The Catholic Church is convinced that its teaching that homosexual activity is sinful “is well-founded in the Old and in the New Testament” as well as in the tradition of Christianity, he said.

And, Cardinal Kasper said, the popes have made it very clear to Anglican leaders that the Roman Catholic Church is convinced that because Jesus chose only men to be his apostles the church has no authority to ordain women.

“The Catholic Church finds herself bound by the will of Jesus Christ and does not feel free to establish a new tradition alien to the tradition of the church of all ages,” the cardinal told the bishops.

The ordination of women priests in many Anglican provinces and the authorization for women bishops in several provinces means “the Catholic Church must now take account of the reality that the ordination of women to the priesthood and the episcopate is not only a matter of isolated provinces, but that this is increasingly the stance of the communion,” he said.

Cardinal Kasper told the bishops that he had to be clear about the impact those decisions would have on Roman Catholic-Anglican relations.

“While our dialogue has led to significant agreement on the understanding of ministry, the ordination of women to the episcopate effectively and definitively blocks a possible recognition of Anglican orders by the Catholic Church,” he said.

“It now seems that full visible communion as the aim of our dialogue has receded further,” he said.

The dialogue will continue and “could still lead to good results,” the cardinal said, but “it would not be sustained by the dynamism which arises from the realistic possibility of the unity Christ asks of us, or the shared partaking of the one Lord’s table, for which we so earnestly long.”