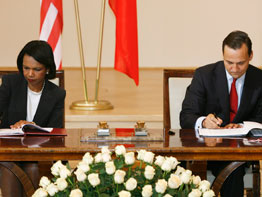 VATICAN CITY – The Vatican newspaper said the U.S. plan to install a missile shield in Eastern Europe could seriously threaten U.S.-Russian relations and the future of global disarmament.

Russia has strongly objected to the plan, saying placement of the missile shield would endanger its own security.

The Vatican newspaper, L’Osservatore Romano, ran a front-page story about the dispute under the headline: “Multilateralism and disarmament at risk.” The article appeared Aug. 21, the day after the United States and Poland signed an agreement to place 10 interceptor missiles in Polish territory.

“The signing of the missile shield agreement … has produced a dynamic that seems able to threaten multilateralism and the process of international disarmament,” the newspaper said.

It warned of “a new worsening of relations between East and West, bringing back an atmosphere that seemed to have been overcome.”

In July, the Czech Republic agreed to station a U.S. radar system, another part of the missile shield, on its territory. The United States has said the shield is not aimed at Russia but at potential rogue states such as Iran.

The Vatican newspaper said the deterioration in U.S.-Russian relations and the prospect of another arms race comes at a time when global spending on armaments is already increasing. It cited recent studies showing that world military spending grew 45 percent from 1997-2007.

According to the Stockholm International Peace Research Institute, which monitors military spending, in 2007 more than $1.3 trillion was spent on arms and other military expenditures – about $202 for every person on earth.